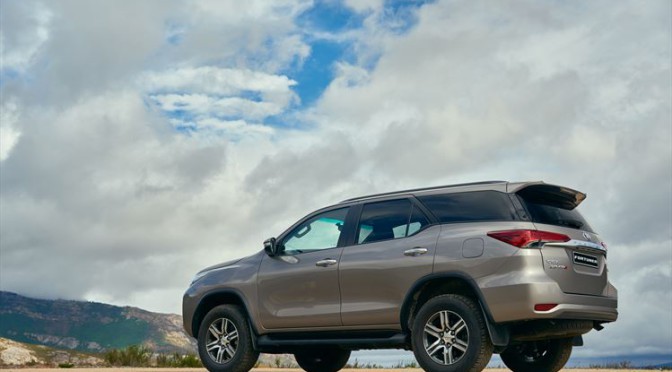 The previous Toyota Fortuner was one of those vehicles that could hardly do any wrong. It won numerous shootouts done by many publications in South Africa and, to be honest, I recommended it to many who asked for advice on buying a vehicle in this particular segment. So when the time came to replace what was a market-leader for Toyota, the bar had been set quite high. Does this new Fortuner have what it takes to fill the shoes of its predecessor?

The new Fortuner gets a fresh design with sculpted lines, a large front bumper that gives the nose of the vehicle a bulky look and slim headlights. Blacked-out C-pillars gives the idea of a floating roof, while at the back, slender taillights and chrome strips bearing the “Fortuner” badge add to the overall modern and upmarket look of the vehicle.

The interior of this particular model feels very basic. It is the entry level model after all. The seat trim is all cloth, while the radio looks like the older digital ones. The higher specced Fortuners get the touchscreen interface. Also different on this model from the models higher up is the manual seat adjustment (driver’s side auto in the models higher up in the range), a non-cooling glovebox (but we’ve never needed those before they started making them, did we?), and manual air-con and heater. I didn’t actually mind any of these “missing” bits. I drive a Daihatsu Charade as my every day car, so I am used to the lack of luxury. The one thing I did miss though is a reverse camera. Or just PDC in general. It’s a 7-seater SUV that’s the size of a Hilux, it’s difficult for someone as small as I am to figure out when I’ve parked safely or when I’ve got more room for movement. Especially seeing as I’ve probably just climbed out of my aforementioned Charade, which I can park with the greatest of ease. That aside though, with other nice-to-haves such as cruise control, audio controls on the steering wheel and USB and Bluetooth connectivity, the Fortuner doesn’t feel like it lacks anything.

I filled the car to capacity at least once during its time with me and while the two extra seats at the back are handy, it’s not suited to adults. The leg room is very limited and taller passengers would also struggle for headroom. But it’s great for kids. When my boyfriend and myself and our three smaller humans (well, they’re his smaller humans, but I like to lay claim to them in some way because they’re so darn cute and lovable) drove around in the Fortuner, we could give each one his own space in the vehicle so there was little bickering about who’s siting on who’s seatbelt buckle (because, safety first). And all the school bags and other paraphernalia that comes with three boisterous boys between the ages of 6 and 15 could be stacked in the car with ease, too.

Speaking of safety and kids and families, it’s good to know that the Fortuner comes with a lengthy list of standard safety features including an array of airbags, ABS with EBD, brake assist, hill assist, Isofix child seat achorages, and more that you can read about here. http://toyota.co.za/ranges/fortuner#specifications

Under the bonnet of this Fortuner lies a hardworking 2,4 litre diesel engine that pushes out 110 kW at 3 400 r/min and 400 N.m of torque between 1 600 and 2 000 r/min. Mated with a six-speed manual transmission, the engine pulls away strongly and while it’s not very refined, it proved perfectly capable to navigate the Cape Town city roads and trawl the suburbs. Toyota claims a fuel consumption of 7,0-litres/100 km and a CO2 figure of 184 g/km.

Yes, this Fortuner feels basic and more rugged than I would like my city/school run car (let’s be honest, it will be exactly that for most who buy it), but at a recommended price of R436 400, it’s good value in today’s market. Consider that the Ford Everest that is considered the competitor to this vehicle comes in at a starting price of R634 900. The price of the Toyota includes a 5-year/90 000 km service plan and a 3 years/100 000 km warranty. Would I consider it if I could afford it? For sure.