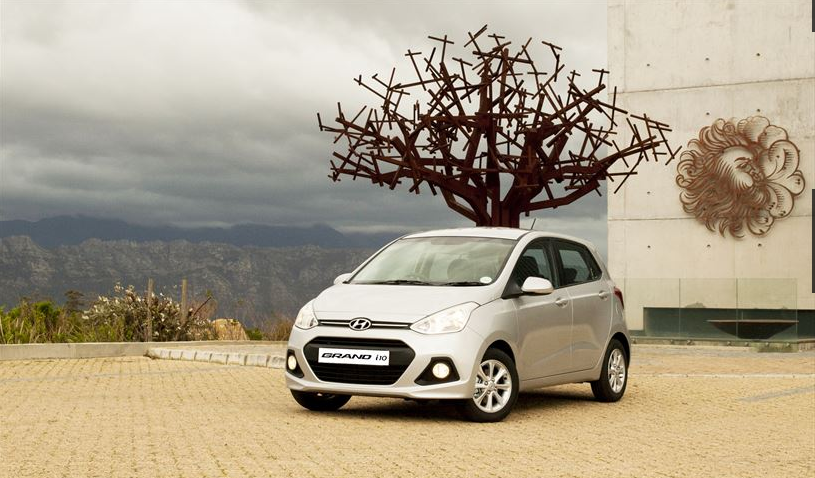 The much loved Hyundai Getz is no more, BUT, never fear because Hyundai has replaced it with the Grand i10 and after driving it at the local launch this week we can happily say it is as good.  It’s comfortable, drives well and the standard spec level is impressive.

So you might be confused as to where this car fits in to the market. Well, put it this way, it is slap bang in the middle of the i10 and the i20. A fellow colleague even asked why Hyundai not just call it the i15 then. Good question! But alas, it will remain to be called the Grand i10. It is slightly longer and wider than the base model i10 and will be taking on the likes of the Ford Figo, the Volkswagen Vivo and the Toyota Etios.

You will instantly recognise the i10 with its hexagonal grille which is that of Hyundai’s design language. It has side indicators, a rear spoiler with LED brake light and alloy wheels. Just because it’s in the budget segment (well it’s pretty much between the A and B segment which is a tad blurry) doesn’t mean it’s not a looker. In fact we think it is a really cute yet cool little guy!

Inside is as impressive. It’s sufficiently spacious and feels rather upmarket and as for the standard spec level, it’s lengthy. Basically you are not left wanting. There is keyless entry, electrically heated and foldable mirrors, Bluetooth, CD/MP3/USB audio system with RDS, central locking, air conditioning, a trip computer, ABS, EBD, and dual airbags.

A really cool feature is the storage space under the passenger seat for us ladies to put our handbags out of site. There have been far too many smash and grab incidents of late, it can happen so quickly. This is something we want to see more of in new cars. The boot space is 256 dm3 and grows to 1 202 dm3 with the rear seats down.

There are three models available; firstly the 1,25 Motion which is the entry level derivative mated to a five-speed manual gearbox, the 1, 25 Fluid manual which has a slightly higher spec and the 1,25 Fluid with a four-speed automatic transmission. The 64kW of power doesn’t sound like a lot but bear in mind this is a fairly light car so I was rather impressed with this peppy little engine. I would have preferred it to have a sixth gear for the long haul driving, but for the spurts around town you don’t need much more than what’s on offer.

The fuel consumption is claimed to be 5, 9 l/100 km for the manual and 6,9 L/100 km for the four-speed auto. The Grand i10 comes with a standard 5 year/150 000 km warranty and roadside assistance plan added. But the service plan is an optional extra you will have to pay for.

Pricing ranges from R139 900 for the entry level to R159 900 for the automatic, which is still relatively competitive for an automatic car. I think the Polo Vivo and Etios may have a good fight on their hands. I think Hyundai is going to see similar success to that of the Getz with this grand Grand i10!