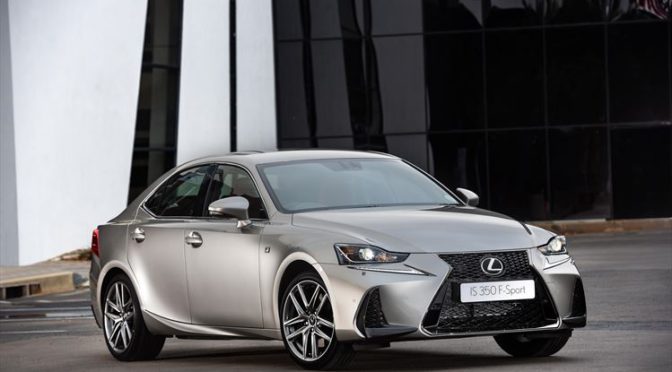 What do you think when you think about Lexus? Do you think it is an ‘elderly’ person’s car? One that is certainly not aimed at the youth? If I am very honest, this is exactly how I have always pictured Lexus. A brand that doesn’t really stand out for me and one that doesn’t make a huge impact on my motoring emotions. And I am not the only one to think this. Just look at the sales within the family sedan segment. The Germans dominate and not because they are better than Lexus, it’s all a bit of a mystery really.

The styling has always been modern and refreshing, the engine refined and overall a well-made product. So, what did they need to change on the 2017 IS? Well not much really! From a styling point of view you will have to look very closely to see the tweaks made. You may notice the spindle grill, the reshaped bonnet, new LED lights and larger front air intakes. The rear sees redesigned LED taillights and new rectangular chrome-effect exhaust tips. And there are two new colours to choose from, namely Graphite Black on all models and Deep Blue on F Sport.

The cabin has seen minor tweaks as well. If you are in the E or EX trim-level you will notice an increased multimedia display screen. The F-Sport Drive Mode Select now has a “customize” setting. The audio and ventilation control panel has also been revised. Black metallic paint has been adopted for the ornamentation at the back of the displays on top of the instrument panel. The bezel area of the clock has been changed to two-tone silver and black, and a premium panel with stitching has been adopted on top of the meter cluster.

The interior still doesn’t feel overly modern, but it is designed with the driver in mind and it’s noticeable. I was more than comfortable over the more than 350 km we drove at the local launch. And something that struck me was just how quiet the cabin is. Everything is situated in an easy to reach spot and the cabin feels clean and functional.

Regarding the engine line up, it remains unchanged. The three models to choose from include the IS200t with its recently launched two-litre turbo engine and the IS350 F Sport which sees a 3,5-litre quad cam V6 under the bonnet.

If I was only given one word to describe the Lexus IS, it would be the word ‘smooth.’ The ride, the handling, the steering, the engine, the transmission, the whole package…it all feels creamy and smooth (never did I think I would use those two words together when writing about a car). Gliding along the mountain passes on our route I just felt confident and comfortable. This car is made for long distance travelling.

The Lexus IS has some serious competitors, think Audi A4, BMW 3 Series and Mercedes-Benz C-Class. Where would you place the IS? Is Lexus as premium as some of its competitors? Is it as desirable? Well, that would be for you to decide, but I feel it is certainly a worthy contender.

Pricing for the new Lexus IS: