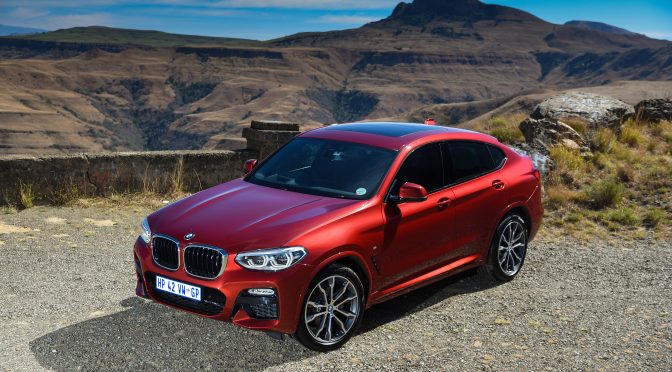 The all-new BMW X4 follows the excitement of the new BMW X3 to offer something almost as practical, but with a bit more dynamism. The X4 is now available in South Africa and it is here to continue the success story of the first ever Sports Activity Coupe at the premium end of the mid-size class. We attended its launch in KZN to find out more…

That’s right, the BMW X4 combines Sports Activity performance with Coupe styling to give you an SUV with a twist! Visually, its daring, individual character oozes sporty intent, as well as sophisticated and refined styling, while under the bonnet lies power-packing machinery that provides excellent delivery on the road! Size-wise, the X4 has grown by 81 mm in length, 37 mm in width and 53 mm have been added to its wheelbase.

Inside, the X4’s interior resembles much of the X3, with loads of soft, high quality and modern materials that surround its technologically advanced cabin and infotainment system. There is storage everywhere in the X4, with loads of compartments and fold away trays to keep your keys, phones, chargers and water bottles out of the way. Redesigned sports seats with boldly contoured side bolsters and knee pads on the sides of the centre console add to the sense of sportiness, while embossed X logos on the doors further its striking design.

Its BMW iDrive system is one of our favourite infotainment systems around – it’s intuitive and easy-to-use and you can access everything either by swiping through its touchscreen or by operating its rotary dial.

The BMW X4 could be well-suited to both Moms and Dads of busy, adventurous and stylish families. Large seats and boot space, comfort and safety features will assist parents on school runs and outings, while its performance-focused drive quality and agile handling on the road is going to satisfy Mom (or Dad) on those weekends away from the city.

For now, customers have two petrol engines to choose from, (xDrive20i and the range-topping M40i), as well as the xDrive20d diesel engine. Trim levels are available from standard to M Sport to M Sport X. A M40d is said to be arriving in South Africa in the beginning of next year (2019). The BMW M Performance models come equipped as standard with 20-inch light-alloy wheels, specially designed M Sport brakes and an M Sport differential, which generates a precise locking effect at the rear wheels to help the car power out of corners with refreshing dynamic élan.

So what’s it like to drive, you ask? Well, our first impressions are good. More than good. At its launch we drove the high-end, sportiest of all, M40i version which is powered by a 3.0-litre turbocharged straight six and offers an action-packed 265 kW and 500 Nm of torque (much more than you need from a mid-sized SUV). While it’s all very well knowing the amount of power and performance it packs, the BMW X4 has a way of blending into different environments about it. In the city it is a smooth, gentle, no-fuss affair. On the highway, its ferocious and sporty character excels, making you feel confident and daring at times. Surprisingly, driving on gravel it almost feels as though you could be driving on ice!

Being such a dynamic and versatile SUV with a broad range of features to suit families, business women/men and driving enthusiasts who need a spacious and stylish SUV, I am brought to the conclusion that the new BMW X4 is going to be a big consideration for many.

Pricing for the new BMW X4 starts at R843 000 for the X4 xDrive20i Standard model. Click here for more info.