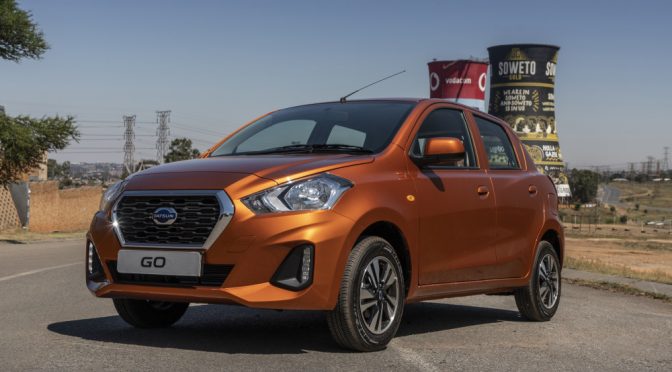 The new Datsun Go is here and we can finally add it to our “New cars for under R150 000” list! The newly launched model offers loads of new standard spec, updated styling and (thankfully) added safety – and it still comes in at an extremely affordable price…

The last time I drove a Datsun Go I was road tripping solo down Durban’s south coast and my memories of it are limited to what I’d told the rental company upon my return: Never. Again. Granted, this was over four years ago when I hadn’t quite understood just how vulnerable a girl can feel when you’re driving along a notorious road where people will pull your teeth our for nothing. So the then Datsun Go’s lack of safety features wasn’t the most comforting thing to learn.

Fast forward to 2018 and the recently launched Datsun Go has completely changed my mind about things. It’s safer (with ABS and one more airbag), trendier (fresh exterior and interior styling) and offers a host of features as standard (such as a classy 7-inch touchscreen).

The next generation of self-starters

At launch, we were reminded that the Datsun Go is targeted at those who have spent their lives using South Africa’s unreliable and unsafe public transport, and who now want to take a step up and get their own set of affordable wheels. It is for “the next generation of self-starters,” as the automaker puts it.

“Our new Datsun GO and GO+ represent a new experience for consumers. With its fresh looks, modern features and advanced technologies, the new Datsun vehicles are made for progressive, ambitious customers with a sense of style,” said Nissan-Datsun SA Marketing Director, Kabelo Rabotho.

There are subtle, yet notable changes to the Datsun Go’s interior and exterior, but what is obvious at first glance is that it has become far more contemporary (despite it being a “cheap” budget car). It’s become somewhat sportier, with a redesigned grille and bumpers (front and rear), as well as 14 inch wheels.

I was surprised to find a 7-inch touchscreen infotainment system when I hopped in. What’s more is that it is offered as standard on both models (MID and LUX) AND features Android Auto/Apple CarPlay functionality.

As far as safety goes (and this is always a big topic when it comes to entry-level cars), the new Go now gets an extra airbag and ABS. We haven’t yet seen any official safety ratings, but the extra features do give us a bit more peace of mind.

A 1.2L 3-cylinder engine powers the Datsun Go with 50kW and 104Nm of torque. There’s not a lot to say about its power and performance, we do need to keep in mind that this really is a car built to help entry-level buyers get to work and back (possibly a trip to the beach on weekends), If you’ve been driving something with a bit more power before getting behind the Go’s wheel, then it might take some getting used to: you need to keep the revs quite high when climbing up hill and I found the gear change between third and fourth to be a bit underwhelming, but again, you really can’t expect anything more than functional from it.

Overall, the Datsun Go is no doubt going to appeal to the type of market that South African new-car customers are currently finding themselves in and to those wanting something that’s doesn’t look as ‘cheap’ as it is.

The new Datsun GO and GO+ benefit from the impressive fuel efficiency of the 1.2-litre engine, which has a combined consumption of 5.2 litres per 100km to ensure that increases in the petrol price don’t put a damper on your driving pleasure.

These Datsun GO and GO+ models come with a standard 3-year/100,000km warranty and an optional service plan. In addition, consumers will receive one-year insurance with the purchase of a GO or GO+.

If you’re looking for a Datsun Go, with more space for more occupants, the new Go+ is also available: