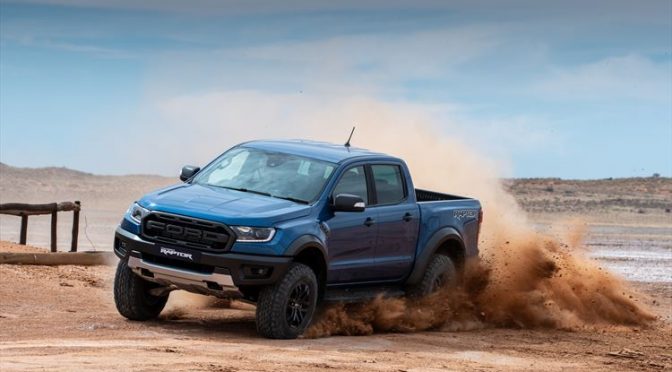 These days, extreme off-roading needn’t be something only enjoyed by the pros. With so many new and clever technologies, safety systems and ample capabilities, there are 4x4s out there that make even the trickiest of obstacles a walk in the park.

The new Raptor does all this and more – and it’s designed to take the harshest beating if you need it to. We had an incredible opportunity to experience it for ourselves in the Salt Pans of the Kalahari where Ford had set up a literal playground for us to put the Raptor to its paces. And so, we’ve got LOTS to talk about… 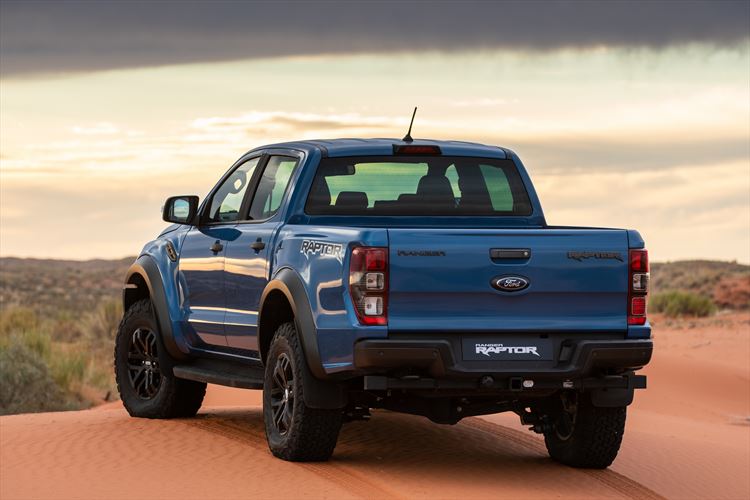 Built on home ground at Ford’s Silverton Assembly Plant in Pretoria, the new Raptor is 100% local!

On the outside, the Raptor shows off its tough intentions with a huge Ford-embossed grille, a bespoke bottom section that includes an aluminium bash plate (to protect the bakkie’s underbody), and its imposing stance made up of its taller ride height, 283mm of ground clearance, as well as a wider front and rear track. This aggressive look suggests that the Raptor means serious business and that it has quite literally been designed to take a bashing. 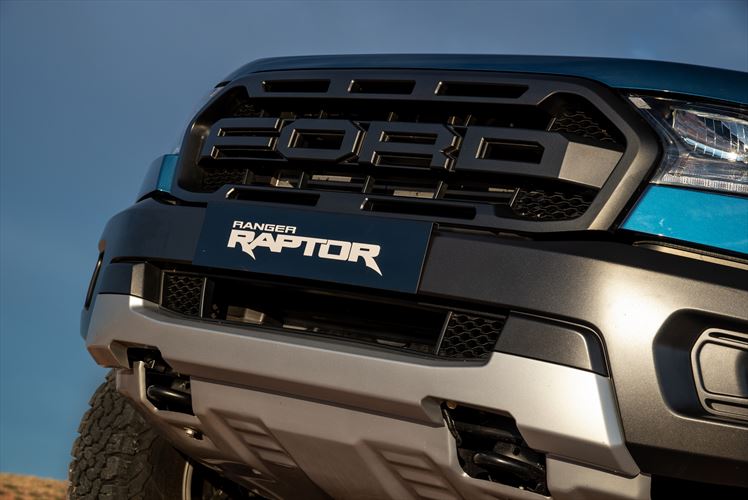 The Raptor’s BF Goodrich tyres are huge and are specifically built for this tough truck to offer drivers even more adventure under extreme circumstances.

Inside, the Raptor’s interior carries a familiar Ranger presence, but with unique highlights such as sports seats that are designed and trimmed in Technical Suede to give you maximum grip and support on your off-roading excursions. They’re also super comfy when in regular driving conditions or cruising around town.

Other sporting details distinguishing the Ranger Raptor include blue stitching and leather accents, as well as the aggressively-styled instrument cluster with distinctive red needles for the dials that emphasise the race-bred credentials.

The steering wheel features perforated leather hand grip sections, paired with Raptor DNA lightweight magnesium paddle shifters for crisp gear changes. The Raptor logo is debossed into the base of the steering wheel and there’s a red alignment marker at the top of it to remind you where the centre point of your wheels is – this really comes in handy in tricky driving conditions like sand dunes. 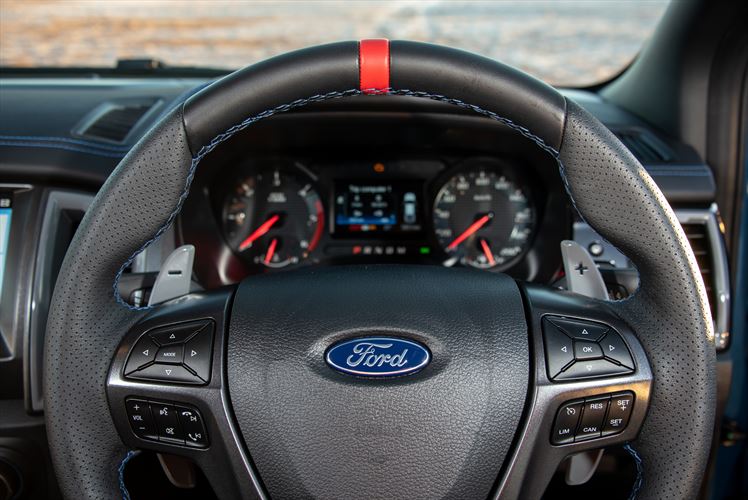 Why you won’t break anything

The Raptor isn’t just a Ranger with a pretty face. It’s built on an entirely different chassis, designed specifically to endure harsh off-road activities. What really sets it apart is its bespoke suspension and race-developed FOX shock absorbers that make extreme terrains and surfaces feel like you’re driving on jelly. At the launch, we had the chance to accompany Ford’s rally driver, Gareth Woolridge, as he drove us through an intense, high-speed and technical rally-like section of the Salt Pans. While most of us could be seen hanging onto the side handles for dear life – thinking that we might lose an organ or two – Gareth casually proceeded to tell us all about the Raptor in detail during the activity, as if driving over large bumps at 180 km/hour was as agile as a swan on a lake.

The Raptor offers a selection of terrain modes, including its ‘Baja Mode’ (named after Mexico’s famous Baja Desert Rally). Baja Mode/aka FUN MODE is what turns the Raptor into the RS of bakkies and enables ultra-responsive, high speed off-road performance. There are of course other terrains to choose from, including Normal, Sport, Grass/gravel/Snow, Mud/Sand and Rock.

Where does all that performance come from?

A new 2.0-litre Bi-Turbo diesel engine that delivers a maximum of 157kW of power and 500Nm of torque is what delivers the Raptor’s power and performance. It is linked to a 10-speed Automatic transmission which Ford built with high-strength steel, aluminium alloys and composites to optimize durability and weight.

It’s worth noting the the new Ranger Raptor took on four days of intense off-road craziness by over 50 motoring media representatives, because the manufacturer clearly believes that this tough truck can take on almost anything.

Okay, so perhaps you’re not going to be taking on this sort of driving on a regular basis (if at all), but the Raptor is definitely going to give drivers a heightened sense of confidence behind the wheel, just by knowing what this beast is capable of and how much fun there is to be had.

I’ll certainly be pointing it out to friends and family when I see it on the road, telling them all about the time when Ford dared us to try and break the new Raptor in the Kalahari, and we lost.

The new Ranger Raptor 2.0 BiT 10AT 4×4 is priced at R786 400 and comes with a four-year/120 000 km comprehensive warranty, a three-year/unlimited distance roadside assistance and a five-year/unlimited km corrosion warranty. A six-year/90 000 km service plan is included, with 15 000km service intervals.