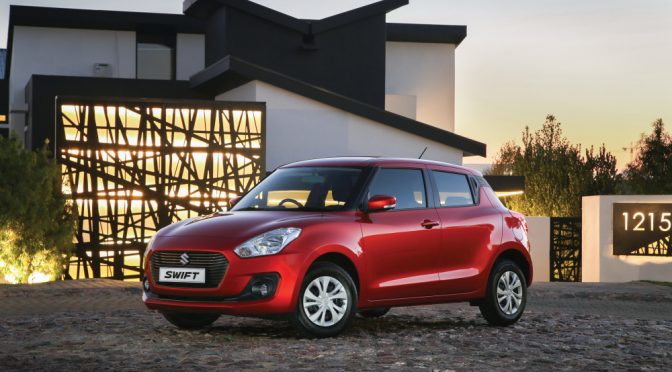 A vehicle that truly lived up to its name, the Suzuki Swift entered South Africa’s market in 2008 and swiftly became a highly popular, value-for-money, hatchback.

In South Africa, the Swift has sold over 19 000 units to date with the previous generation reaching peak volumes of 2 966 units in 2017.

Now, Suzuki introduces the new Swift, to include all of its favoured attributes, plus enhancements to offer more space, more efficiency, more convenience and better fuel consumption.

So, what’s new about the new Suzuki Swift?

The new Suzuki Swift builds on the success of its predecessor with a host of new and appealing features.

The new Swift takes a big leap forward in terms of design. While the overall shape is still largely familiar, there are big changes to its exterior. It’s sportier, bolder and more modern, thanks to integrated and reinterpreted styling elements such as rear door handles in the C-pillar, blacked-out front and centre pillars with a blacked top-section on the rear pillar to create the impression of a floating roof.

A large hexagonal grille on its nose and angular full LED headlamps bring the Swift’s front face to a more modern level of design. From the side, the Swift shows notable changes that contribute to an aesthetically, well proportioned exterior.

The third generation Swift is 10 mm shorter, but 40mm wider, which favours better and dynamic road handling. We know that our female readers and Swift fans will be pleased to learn that boot space has been increased by 58 litres (offering 268 litres in total). A larger wheelbase together with new dimensions give the new Swift more interior space – especially notable in the rear. We love how much the new Swift offers a real sense of roominess at the back (with an additional 23 mm of headroom) which is particularly pleasant when travelling long distances, as we did at launch.

Seated in the new Swift, whether at the front or back, is extremely comfortable, and because you sit slightly lower than before, you get a sense of sportiness from the side glass which sits at shoulder length.

There are loads of storage compartments, including two front and one rear cup holder, side door bins, and large console tray box to store your phone and keys, a nicely sized glovebox and a passenger seat pocket.

Improved design and quality in the cabin makes the new Swift a really comfortable and happy place to be.

With South Africa’s soaring fuel price hikes, we’re all looking for a vehicle that offers as much efficiency as it does practicality. This is where the Swift truly excels while it offers a combined fuel consumption rated at 4.9 litres per 100 km and offers over 750 km on its 37-litre tank. At launch we averaged around 5,3 litres per 100 km while driving through rural areas and highways.

In terms of practicality, drivers are going to enjoy the Swift’s 4.8 meter turning radius for those tight and tricky parking spots in the city.

Everything about the Swift is ultra light. From steering, to the clutch, to its overall weight (875 kg – 95kg lighter than the outgoing model).

The new Swift’s K12M four-cylinder engine offers power delivery of 61kW and 113 N.m. of torque, which is more than enough for its class and surprisingly ‘swift’ on the open road. I loved the ease of clutch control which seems light and effortless (and great when you’re sitting in uphill traffic). It’s mates to a five-speed manual gearbox in the GA model, while the GL model gives an option for an AMT version with the same number of gears.

The Suzuki Swift will be available in three model derivatives. The GA-model offers an attractive entry-price to the range (R159 900) and is still equipped with a range of creature comforts, such as air conditioning, front and rear electric windows, as well as standard safety spec such as ABS with EBD, ISOFIX child seat anchors and two airbags.

To conclude, we think that Suzuki has taken an already suburb and proven product to a new level of appeal and we’re certain that we’ll be seeing plenty of the new Swifts on the road. If you’re in the market for an affordable, practical and efficient hatch, do yourself a favour and go and test drive the new Swift!

Also read: Suzuki spruce up the Swift 1.2 and Dzire models!

If you’re looking for something a bit bigger, check out Suzuki’s new Dzire sedan model, which isn’t ‘just a bigger Swift’ and now stands alone in a new model range.