Today, if you consider what some new vehicles in the market have to offer, you might think to yourself, “what next?” With technologies that seem to advance overnight, it’s hard not to think what the cars of our future will have to offer, but for now the biggest step up for Volkswagen (in terms of technology) is its new Touareg model. This, says the automaker is Volkswagen’s “most technologically advanced model of its era”, and we’ve just spent two days in the Eastern Cape getting to meet it in the metal.

Visually, the new Touareg has also been refined and resembles a bold and dominant newcomer, and one that means serious business! Sharp lines and creases (much like you’ll see on the new Polo) – give it an ultra modern touch. It’s slightly longer and wider than the old Touareg, but it’s also slightly lower, giving it dynamic and sportier stance, while its wrap-around LED tail lights look great at night! We think VW has done a decent job at bringing the Touareg’s exterior appeal up to speed in such a competitive segment.

Inside, the new Touareg is where this premium SUV truly excites, while Volkswagen states that its innovative design and tech is catered to adapt to the driver, rather than the other way around. Its cabin sets a new class benchmark for the Touareg’s interior quality and design and its Innovision Cockpit is a cut above the rest! (It is also the first time that Volkswagen has presented a fully digitalised Innovision Cockpit.)

“Drivers use the Innovision Cockpit to adapt the assistance, handling and comfort systems specifically to their personal tastes; the car becomes ‘their’ Touareg,” says Volkswagen. 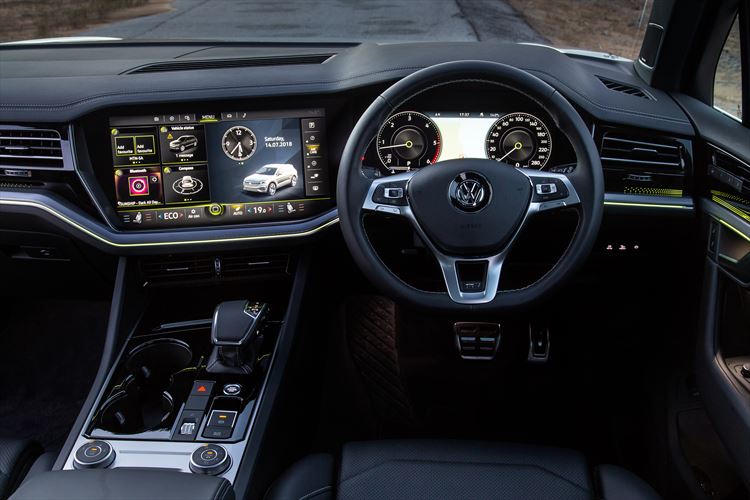 Stepping inside the Touareg came with all sorts of surprises. I am one of those who have previously found it hard to put the words ‘premium SUV’ and ‘Volkswagen’ in the same sentence, however the moment I stepped into the cabin, I had to keep reminding myself that I was in a Volkswagen. Its high level of refinement and luxury is just not something I’ve come to expect from a VW, but this is no longer the case! To list all of its fancy features (even just as standard) would be a lengthy ordeal, even in its entry-level model that had me going “what? does that really come as standard?” Some of these include the Touareg’s electrically folding towbar, Active Climate for the front seats (having heated seats is one thing – but cooling off your back so you don’t stick to the chair in summer is a winner), a panormaic sunroof, as well as Volkswagen’s ‘Discover Pro’ navigation system. There is loads more as standard (go to the end of this article to take a look).

Also read: The new Volkswagen Touareg is here and this is what it costs

The new Touareg is also the first Volkswagen model available with a night vision system. We tried this out in Plettenberg Bay and it really is like something out of a Sci-Fi movie, where a thermal image camera (infrared) registers infrared radiation coming from a living being. It registers people or animals and depending on the risk factor, marks it yellow or red. You’ll be amazed at how much you DON’T see at night without it. If Night Vision registers a risk, it actively warns the driver and if necessary decelerates using its preconditioned brake assist system.

I could go on talking about everything the new Touareg has to offer in terms of technology, but please do have a look at Volkswagen’s website to see more.

You can’t expect a vehicle with this much hype, to be anything but enjoyable to drive, can you? The new Touareg is launched with just one engine, the V6 TDI, which offers outputs of 190 kW and 600 N.m of torque. Other engine versions may still be introduced to the local market at some point, but for now, the V6 TDI is as quiet and composed as it is elsewhere in the range. It glides effortlessly, even on twisty gravel roads where we were able to have heaps of fun as it maintained its level of comfort and ride quality perfectly. Its big wheels (20 inch Braga Alloys on the top-specced Executive model) make driving over rough and bumpy surfaces feel effortless, and its wider, longer and lower body structure keeps it firmly planted and secure on the road. It’s hard to imagine that a car as big as this could be quite as agile as it was, and there were moments when it felt as if I was comfortably seated in a luxury boat, gliding through the forest and mountain passes effortlessly. The new Touareg’s Offroad feature gives you a selection of terrains to adapt to (including Snow, Gravel and Sand), and as great as it is to venture off the beaten track with the new Touareg, don’t expect it to match performance and capabilities of other off-road specific vehicles.

The new Touareg also comes with a very advanced Cruise Control system, that adapts to the way you drive over time, and keeps an eye on things around you, such as cars that might be straying up close and alongside you. It also reads the speed signs around you and will lower the speed in Cruise Control accordingly and raise it again once you’re in a higher speed zone. Impressive!

Perhaps in the past, Volkswagen has never crossed your mind when you thought about premium SUVs in the local market, especially with so many high-end brands that would usually be associated with this sort of quality. The new Volkswagen Touareg might have its work cut out for it, but with so much standard specification, you won’t have to spend extra thousands loading extra options. This premium SUV is going to give you everything you want and need at a competitive price, with loads to play with and we suspect that it is going to be a game-changer in the segment.

For more information about the new Volkswagen Touareg click here.