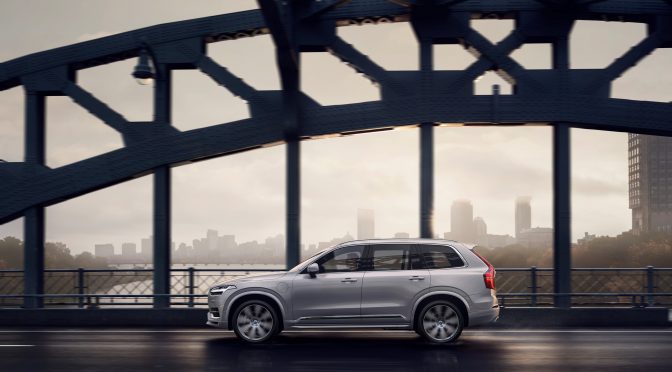 Volvo’s top-selling XC90 has been recharged to offer South Africa’s growing families a new six-seater configuration, new wheels, more colour options, and some subtle styling enhancements. We made sure we were in on the action last week (August 2019) when Volvo Cars South Africa introduced the exclusive recharged XC90 to our local market in the Cape…

At a glance the refreshed XC90 appears much the same as it was before – which is a good thing, because it is the SUV of Swedish sophistication after all. If you really want to find something different about its looks, it bears a slightly revised and perhaps more modern looking grille. Apart from this, there isn’t too much else that’s changed about the exterior, other than a few wheel choices and new body colour options.

Step inside and you’ll find, as you’d expect, one of the most luxurious and spacious cabins in the premium market to date. What is new for 2019 is the crystal glass gear lever from Orrefors, the famous Swedish glassmaker as well as diamond-cut controls for the start/stop button and volume control (available on the T8 Inscription model).

Joining @volvocarsa to spend some quality time with the gorgeous updated XC90.

Before, large families had the seven-seat configuration available for the XC90 but now; Volvo has introduced a new six-seat configuration as another option, to offer more space for rear passengers. Take a look here:There are also more connectivity options for more family members. Volvo has also thrown in an additional USB port as well as a P-sim card slot.

There are new plush materials for customers to choose from too, including a refined slate grey upholstery. In terms of personalising the XC90’s interior, new decor inlays can be customised with further options from Volvo. For me, what stands out the most about being in the cabin of the Volvo XC90 is that although it is super sophisticated and premium, it still feels family-friendly, perhaps thanks to Volvo’s instant feeling of safety, comfort and practicality.

Speaking of safety, and you can only ever expect the best from Volvo – what with being one of the safest cars out there and all – the XC90 features Adaptive Cruise Control, Distance Alert, Lane Keeping Aid, Run-Off Road Mitigation/Protection, Driver Alert Control, Road Sign Information, Electronic Stability Control, Emergency Brake Light, Brakes with Hill Start Assist and Automatic Hold, Automatic braking after a collision, Roll-Over Protection System, Roll Stability Control, reinforced passenger compartment, SIPS side-impact protection system, collapsible steering column, side and dual-stage airbags (for the driver and front passenger), inflatable curtain, whiplash injury protection system and City Safety with Autobrake (which recognises pedestrians, cyclists and large animals). That’s a mouthful, but Volvo has a bold target to uphold and that is to reduce the number of fatalities and serious injuries caused by road accidents to zero by the year 2020!

The facelifted Volvo XC90 is powered by its trusted 2.0-litre turbocharged 4-cylinder engine and customers can choose between a petrol or diesel option. All XC90s come standard with a slick-shifting eight-speed automatic gearbox, as well as all-wheel drive. During our brief test drives at its launch in and around Cape Town, we spotted impressively low fuel consumptions, (particularly in the D5 variant), a gloriously peaceful ride from the T8’s electric motor, and a punchy and powerful level of performance from the T6. We also had a great time making the most of the XC90’s cabin acoustics thanks Bowers & Wilkons’ 1 476-Watt Class D amplifier sound system – which really can make up for any live concert that may have been previously ruined by Green Point stadium.

For now, three trim levels are available to customers, namely: Momentum, Inscription, and R-Design, the latter offering the sportiest of intentions from sports pedals, black headlining and upgraded interior lighting.