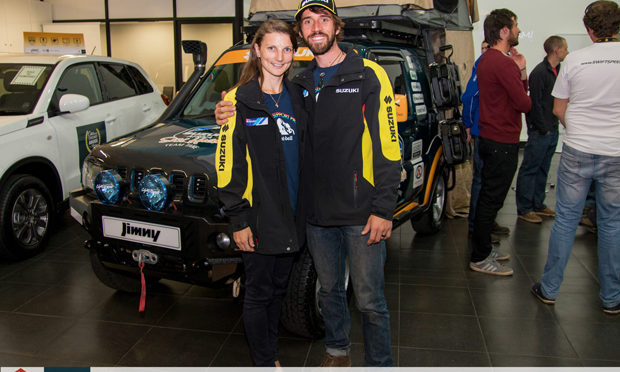 Tarryn, Shane and Badger want to get outside, see the real Africa and scale Africa’s highest mountains – and they are taking you along for the ride.

The married couple Tarryn and Shane Quinnell are the intrepid adventurers in Team Tane, an adventure outfit created by them to inspire mindful travel and living. It has since become synonymous with minimalistic, Africa-based and socially and environmentally focused outdoor adventures.

In 2014, Team Tane ventured to Mount Kenya to raise funds for the leadership skills development charity, GOLD. This year, the duo will up the ante by taking their 2011 Suzuki Jimny, called Badger, through 10 African countries, where they will climb Africa’s five highest mountains.

“During our travels across the world, we realised that there are still a lot of misconceptions about Africa. We want to use this adventure to showcase the friendly, vibrant, luscious Africa that we have come to know, and we are counting on our Jimny to help us do it,” said Shane.

Shane and Tarryn call their adventure Africa Sky High, and Suzuki South Africa has taken the naming rights to the 8-month long adventure. The Suzuki Africa Sky High adventure will see Team Tane travel through South Africa, Botswana, Zambia, Tanzania, Rwanda, Uganda, Kenya, Malawi, Angola and Namibia – often on less travelled roads in search of stories and pictures that will help showcase the friendly and exciting Africa that they have come to know. Along the way, they will be sharing uniquely African environmental and cultural marvels to try and inspire awareness and more people to explore the continent.

“While each is an adventure in its own right, the five mountain summits are secondary to our ultimate goal. We want to show the world our home continent’s diverse beauty and rich ecology. People protect what they love, and they love what they know and understand. We want people to love Africa,” said Tarryn.

Team Tane will embark on their adventure on 29 April.  Suzuki formally bid them a good journey at a function on 21 April 2017 at Bryanston Suzuki in Johannesburg.

“It should be no surprise that Suzuki is so enamoured with Team Tane’s adventure. Their dream of showcasing Africa’s mysteries and making them accessible to other adventurers is a personification of our design philosophy for the Suzuki Jimny,” said André Venter, divisional manager for sales and marketing at Suzuki Auto South Africa.

“The Jimny has certainly made overland adventures accessible to more people and in doing so has developed a cult following.”

Starting at R256 900, the Suzuki Jimny remains one of the most affordable ladder-framed, low-range enabled off-road vehicles in the South African market. While its design as a simple-to-maintain, rugged 4×4 has remained unchanged, Suzuki has upgraded the Jimny over time to include two airbags, ISOfix rear seat anchorage points for child seats, ABS brakes and the option of an automatic gearbox.

Every Suzuki Jimny is sold with a 4-year / 60 000 km service plan and 36-month full mechanical warranty.