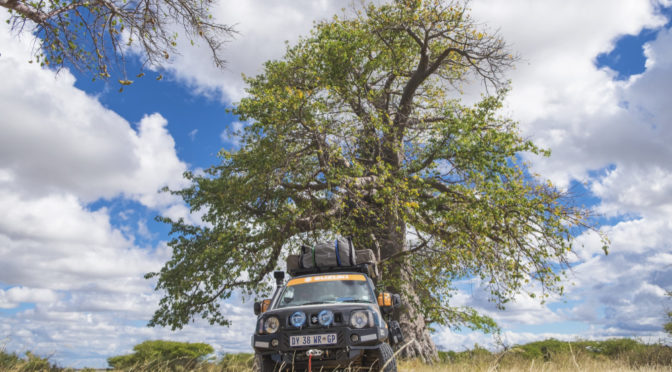 Somewhere on the border of Uganda and the Democratic Republic of the Congo, a tough little Jimny is parked in the shadow of the Mountains of the Moon.

Named ‘Badger’, this 2011 Suzuki Jimny is the team vehicle for Team Tane on their Suzuki Africa Sky High Adventure. With this adventure, the intrepid couple is travelling through 10 African countries to scale the continent’s five highest peaks and to showcase Africa to the world.

Team Tane and Badger departed South Africa on 29 April 2017 for an eight-month adventure. They have since traversed Botswana, Zambia, Tanzania and Rwanda en route to the first three of five mountains.

“It really has been an incredible trip with so many amazing sights and experiences,” says Tarryn Quinnell. “The animals, vegetation and remoteness of Botswana were amazing and the people of Zambia and Rwanda particularly welcoming.

“My favourite adventures so far have been swimming in the crystal clear waters of Lake Tanganyika and interacting with the locals while walking through the villages of Kigoma, Tanzania, to find the mango tree where Stanley met Livingstone.”

Tarryn and her husband, Shane, are documenting their adventure in an effort to showcase the culturally rich, environmentally diverse and inviting side of Africa to South Africans and the world. In the past, they have embarked on many similar adventures on the continent and abroad and for this, their most challenging adventure to date, they have partnered with Suzuki South Africa.

With two months completed, Team Tane has already had more of its share of adventure and challenges. In Botswana they had to navigate through the flooded Makgadigadi pans, which forced them to clean their rear drum brakes and fix a sway rod that was damaged on an unseen deep hole in the road.

“The Jimny has impressed us no end. It has performed faultlessly, despite a payload of 400kg and some very challenging off-road driving and endless driving on deeply rutted and corrugated dirt roads. What’s more, is that it is using only 9.9 litres / 100 km on average,” says Shane.

While Badger has thus far performed without a hitch, Tarryn and Shane hit a speed bump somewhere between South Africa and Uganda. Here the duo picked up a mystery bug that landed them both in a Kigali hospital and forced them to recuperate for a few days on the couch of a Rwandan local before continuing.

Once the team felt slightly better, they climbed Mt Muhabura and took with them a model of their trusted Jimny, which they called “Badgito”. Mt Muhabura is an old volcano, which at 4 127m is four times higher than Table Mountain in Cape Town.

The climb up their first mountain proved a real challenge, as their sickness weakened them more than they believed. Yet, despite their weakened state, the duo decided to climb Mt Sabyinyo on the border of Uganda, Rwanda and the DRC two days later, again with their little Badgito in their backpacks. These two test climbs proved them ready for their five high summits, which they have dubbed the African High Five.

Team Tane has since summited the first three of its five high peaks, Mount Baker, Mount Stanley and Mount Speke. The team reports that all three proved more challenging and technical than they had expected, with all three mountains surprising them with large jagged rock and ice formations near the peaks.

While climbing, the two climbers’ porters nicknamed Tarryn “Suzuki” after they saw her car Badger and likened it to her diminutive stature and her dogged determination.

From these three mountains, the adventurers will depart the Rwenzori National Park and Mountains of the Moon and head to Mount Kenya, the second highest mountain on the continent.

André Kruger, divisional manager for sales and marketing at Suzuki South Africa says: “Team Tane is keeping their word and will constantly update us and their fans on their wonderful adventures. We look forward to the rest of this epic journey and trust that their Jimny won’t let them down.”