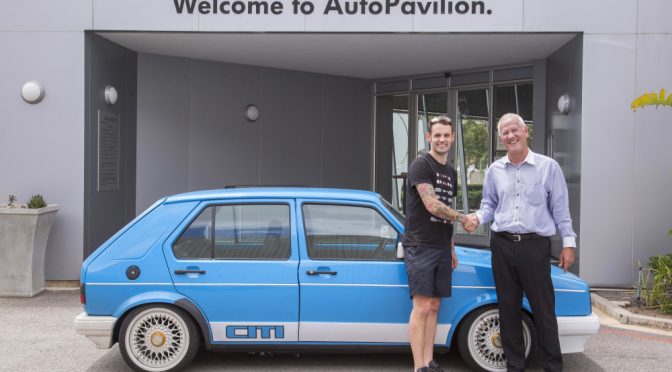 Using the hashtag, #CitiGolfChallenge, car enthusiast, Jamie Orr, will be taking the beloved Citi Golf from South Africa to one of the biggest Volkswagen events, the GTI Treffen in Wörthersee, Germany.

The project started with shipping a Passat 3.6L VR6 engine, complete with Golf 4 VR5 transmission with a Limited Slip Differential, and lightweight billet flywheel and clutch setup, from America to South Africa.

Upon arrival in South Africa at the end of January 2018, Jamie started searching for a suitable Citi Golf.

The Volkswagen Citi Golf was only produced in South Africa, and was never officially sold outside of the African continent. “While the Golf 1 enjoys a strong enthusiast following around the world, Citi Golfs are a rare sight even at Volkswagen fan events, that is why I wanted to buy restore, and share one as much as possible,” says Jamie Orr.

The team were able to get their hands on a 1991 classic blue two-tone Citi which only had dents and minor mechanical issues. The build challenge included installing the imported 225Kw VR6 engine, with original factory fuel management and wiring and a full respray in the original colour.

The exterior and interior were updated with GTi Mk7 inspired seat fabric, all-new steering components and upgraded brakes. The interior trim work features classic images from the Gauteng province and other iconic images tastefully lining the stereo system components inside the boot.

The build, which took almost a week, culminated in the Citi Golf attending its first show, the VDub Camp Fest in Bela Bela which was held in the beginning of February. The journey then took the Citi Golf to the Volkswagen Uitenhage factory, some 1 000kilometres away from Gauteng.

“Although production of the Citi Golf stopped nearly 10 years ago in South Africa, I wanted to come and visit the Uitenhage factory as symbolic point of this journey,” adds Orr.

“We are proud to have such keen Volkswagen enthusiasts and it was a pleasure for us to supply parts for the Citi Golf as well as to host Jamie at the AutoPavilion and take him on a factory tour which has seen major investment since ceasing production of the Citi Golf in 2009,” said Matt Gennrich, VWSA Communications General Manager.

“In Wolfsburg, we will apply the finishing touches, before another 1 000km drive to the GTI Treffen in Wörthersee. The tour of Europe will also include factory and museum visits as well as a trip to the infamous Nurburgring race track,” concluded Orr.

After the #CitiGolfChallenge is done, the car would have travelled to three continents and its final destination will be in America.