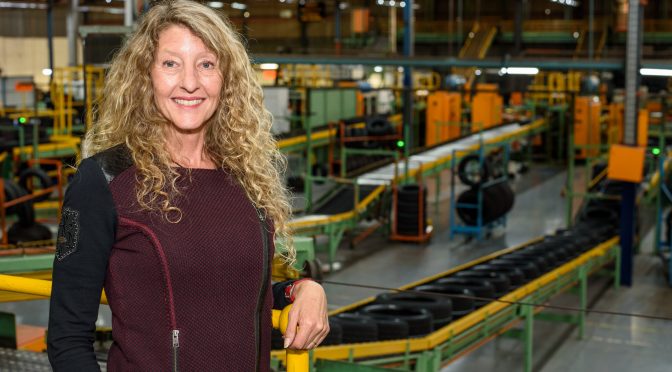 In South Africa, the motoring industry is still considered to be very much a ‘man’s world’, despite a small increase in the number of women who feature in certain roles, from engineering to design.

When it comes to motor sport, female racers are hard to find, but Clare Vale has made her name in the industry with everything from racing to drifting, and taking on initiatives such as Women in Road Safety. She’s also the director of a used-trucks and -trailers dealership. She has claimed carious motor-sport titles and was the first female racer to take pole and lead the race at the 2009 WesBank V8 Supercar Series at Kyalami. Numerous achievements as South Africa’s first woman in motor sport followed.

How old were you when you first climbed behind the wheel? Who taught you to drive and when did you realise you had a passion for driving?

I was about 16 when I learnt to drive, courtesy of my first boyfriend. He had a white VW Beetle and he also taught me to ride a bike – my first daily drive was actually a Yamaha XT500 “Thumper”. I was car-crazy from a very young age and I spent all my pocket money on Matchbox cars, so it’s safe to say the passion was there from the start.

What would you say has been your most memorable experience as a female racer?

I have been incredibly fortunate to drive a wide range of cars in my career. I was lucky to race in the WesBank V8 Series at a time when the class was at its peak. It was a hugely macho class with an epic history, and it was pretty daunting arriving on the scene as a relatively inexperienced female newbie! However, my best motor-sport memories were made while racing V8s, and other drivers such as Franco Di Matteo and Willie Hepburn remain some of my closest friends and mentors. The cars are awesome to race; nothing quite compares to the feeling of driving a WesBank flat out through Potter’s Pass in East London – the V8s reach almost 300km/h there.

What safety measures do you feel are needed to improve South Africa’s dangerous roads?

The most frightening thing that I see is the increasing lawlessness on our roads. Without real, visible policing, our roads will remain a warzone, where you take your life in your hands on a daily basis. Our traffic police need to do more than set up speed traps and have annual holiday blitzes – they should be out on the road issuing spot fines, directing traffic when traffic lights are out of action and nailing offenders such as drunk drivers and unroadworthy truck and taxi operators. Of course, there are many other issues that need to be addressed too, such as poor road conditions, unlicensed drivers, fraudulent licences … the list goes on.

What can our readers learn from pro drivers like you to improve their driving skills?

Take responsibility for your own safety. Take driving seriously, and upgrade your skills by completing a defensive-driving or advanced-driving course. Always pay attention to what is happening around you – notice in your rear-view mirror when a speeding car is approaching and anticipate that a pedestrian is about to cross the road in front of you. Become road-aware! It might save your life one day.

What are your driving no-nos?

Any form of distracted driving is a problem. You can safely guess that the guy in front of you weaving over the line is chatting on his phone! The one thing that really triggers my road rage, though, is people running red lights. On my drive home from work I see cars and trucks racing through red lights every night, with so many heart-stopping close shaves. The saddest part is that it’s usually the innocent party who ends up killed or maimed. I also wish that all parents would strap their precious children in – I still see so many young children bouncing around unrestrained, risking serious injury or death in the case of an accident.

If you could change one thing on our roads, what would it be?

Just one?! Attitude. We all need to take responsibility for road safety – not only for our own safety, but also for that of pedestrians, children and other road users.

Clare Vale says that being a female in motoring means…

On the track: working hard to earn your respect to the point where you are just another competitor under your helmet.

On the road: making sure you are a competent driver who understands the basics of looking after your car.

In the automotive business: constantly developing your skills and knowledge to stay ahead of the game.