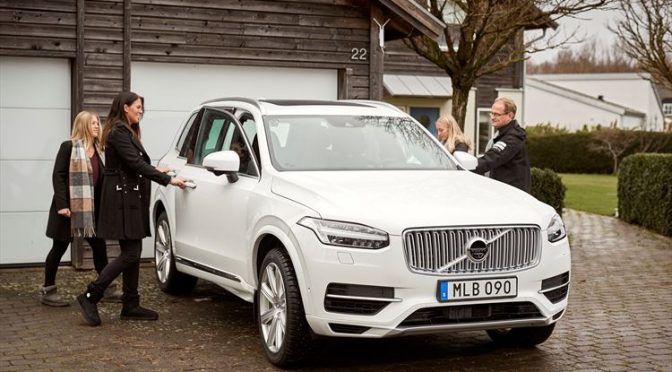 Volvo Cars will from today start developing its autonomous drive cars with help from Swedish families who will test its cars on the public roads of Gothenburg and feed back their impressions to Volvo Cars engineers.

The first two families, the Hains and the Simonovskis from the Gothenburg area, have now received the Volvo XC90 premium SUVs with which they will support the Drive Me project. Three more families will follow early next year and over the next four years, up to 100 people will be involved in Drive Me.

Both families will contribute to Drive Me with invaluable data by allowing engineers at the company to monitor their everyday use and interaction with the car, as they drive to work, take the kids to school or go shopping for groceries.

Volvo Cars plans to have a fully autonomous car commercially available by 2021 and the data derived from Drive Me will play a crucial role in the development of these autonomous cars.

“It feels great to be a part of this project,” says Alex Hain, 45 years old. “We get the chance to be part of developing technology that will one day save lives.”

“Drive Me is an important research project for Volvo Cars,” says Henrik Green, Senior Vice President for the company’s R&D department. “We expect to learn a lot from engaging these families and will use their experiences to shape the development of our autonomous driving technology, so that by 2021 we can offer our customers a fully autonomous car.”

The Hains and the Simonovskis have received Volvo XC90s fitted with Volvo’s latest driver assistance technology as well as an array of cameras and sensors to monitor their behaviour and provide the car with information on its surroundings.

During these first stages, the families will keep their hands on the steering wheel and supervise the driving at all times when using their cars. But, over time, all participants in the Drive Me project will gradually be introduced to more advanced assisted driving cars, after receiving special training.

Even then, testing these more advanced cars will initially take place in controlled environments with supervision from a Volvo Cars safety expert. No technology will ever be introduced if there is any question over its safety.

This means Volvo Cars continues to develop autonomous cars with the same care and thoroughness that has helped it establish its position as the builder of some of the world’s safest cars.

The Hain family comprises Alex and Paula (45 years old), and their daughters Filippa (17) and Smilla (14). The Hains were the first people chosen to take part in Drive Me earlier this year.

They are now joined by Sasko Simonovski (44) and his wife Anna (41), and their children Elin (10) and Villiam (8). Additional families will be added going forward as the project progresses.