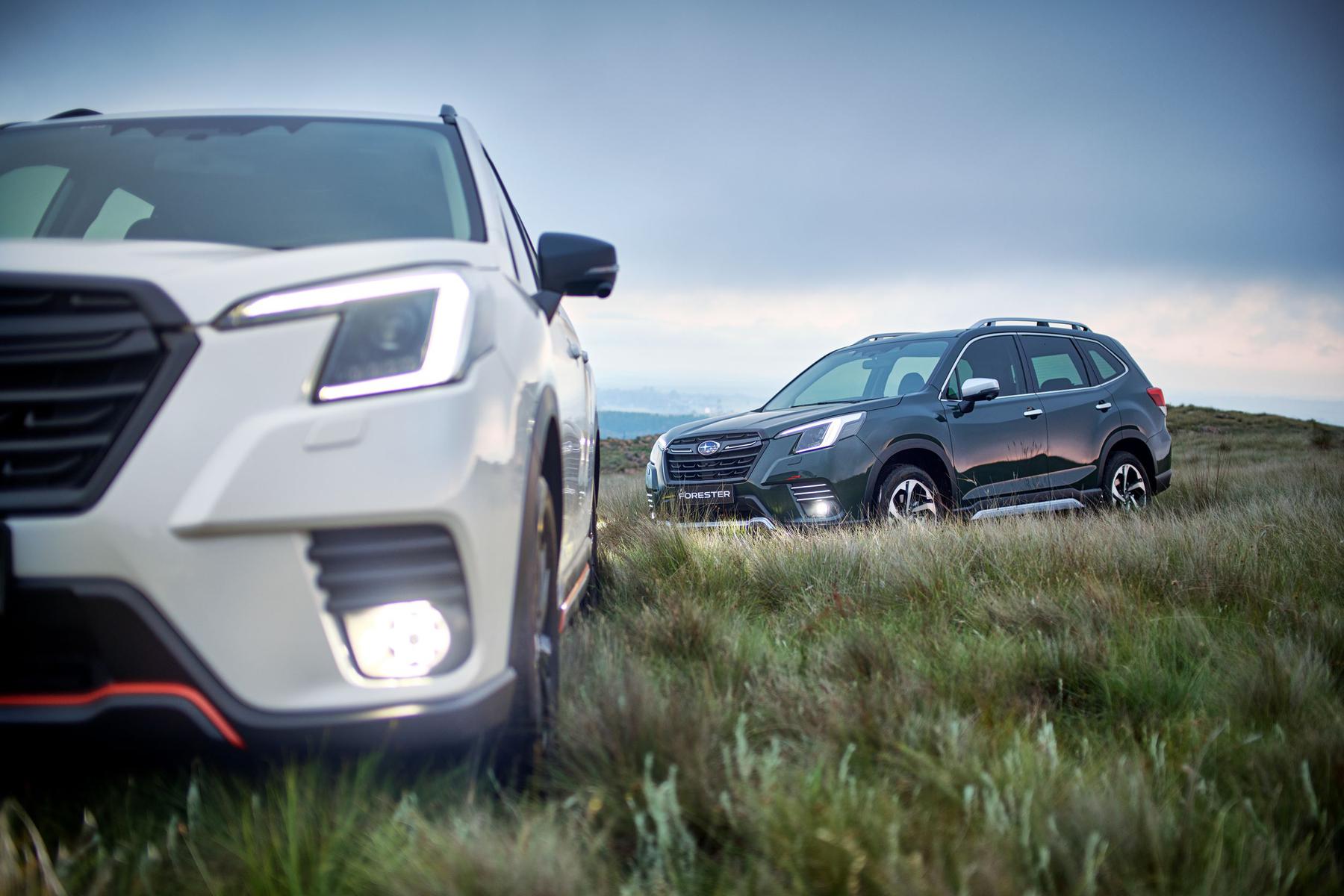 The 2022 Subaru Forester will be offered in four derivatives including the 2.0-litre and 2.5-litre variants in their respective Sport and Premium trims and specifications.

The biggest exterior design changes have taken place at the front of the vehicle. A larger, hexagonal grille takes centre stage with a reduced headlight design. The result is a more dynamic and sturdier stance. The grille and front bumper now incorporate more use of black elements around the redesigned headlight and foglamp clusters. The reworked headlights now include an array of LED bulbs for improved driver vision as part of the Forester Adaptive Headlamps and High Beam Assist features.

On the Forester Sport, the fog lamps are six-bulb LED units within a black housing where the Premium Forester’s fog lamp housing includes three chromed horizontal pieces for a more urban finish. Further along the flanks of the Forester, the mirror caps, A and B-pillar covers as well as the rear spoiler and tailgate finishes have all been enhanced. On the Forester Sport, the mirror caps and rear are finished in a geometric textured material, where the Premium Forester is finished in chromed mirror covers and a high gloss black cover.

On the Subaru Forester Sport, the use of the orange and black theme has been tweaked, removing the orange splashes on the air vent surrounds yet maintaining the colour on the stitching and contrasting this with the exclusive Sport’s dark grey colour scheme and water repellent seats.

The powertrains remain unchanged on all derivatives of the new Forester, but the front suspension has been tweaked to improve steering responsiveness, ride quality and handling by reworking the coil springs and dampers. To further improve the NVH levels, the Forester also receives new aluminium engine mount brackets.

X-Mode, Subaru’s smart all-terrain programme has also been updated with improved Hill Descent Control speed management. To enhance driver control, the revised system allows for manual acceleration on descent, with the system re-engaging Hill descent Control when the driver stops accelerating. The revised X-Mode programme also has the ability to re-engage at speeds of 35 km/h or below, after the system has dis-engaged beyond that speed. This tweak allows for less intervention by the driver to continually re-engage the system if the all-terrain environment requires it. It’s a convenient addition to the Subaru’s impressive off-road repertoire. X-Mode is available on all Subaru Forester models.

A more advanced version of EyeSight Driver Assist Technology is introduced to the MY2022 Subaru Forester. The new system delivers all-round improvement for use under a wider array of conditions and environments. There is a new dual camera system with a much wider field of view, almost double what it was. Together with improved software, the system is faster and more intuitive, working to deploy the myriad EyeSight safety functions such as Adaptive Cruise Control, Automatic Pre-Collision Braking, Lane Departure and Sway Warning with even better precision. The system now works with better efficiency at intersections, where accidents frequently occur.

ES or EyeSight-equipped Forester’s also include Blind Spot Detection technology with Lane Change Assist and Rear Cross Traffic Alert as standard features. Reverse Automatic Braking is also included on EyeSight-equipped models, a system which uses sensors to detect objects and can automatically stop the vehicle if the driver does not take evasive action in time while reversing.

The Subaru Forester’s versatility is its forte and to add to that, the roof rails on the MY2022 Forester have also been strengthened and redesigned to allow for a higher load capacity and to ensure the safe use of roof-top tents for instance. Additional tie-down locations have also been integrated into the rails as have two additional utility hooks been added to the roof of the rear cargo area.

The entire 2022 Subaru Forester line-up is driven by Subaru’s signature Boxer engines and Symmetrical All-Wheel Drive system for safe and engaging dynamics as well as maximum traction and control.

The new Subaru Forester is the all-season, all-weather SUV. Local introduction of the new Forester is scheduled for January 2022.

The new Subaru Forester is sold with a 3yr/75 000km full Maintenance Plan as well as a 5-year/150 000km warranty. These are extendable, with various plans available to Subaru customers.