In the late 1800s, the famous and much-quoted Suffragette, Susan B Anthony, was effusive in her admiration of women who were emancipated enough to ‘ride by on a wheel’. She marvelled at ‘the picture of free, untrammelled womanhood’, she rejoiced in the ‘concomitant freedom and self-reliance’. And it was a mere bicycle that elicited this response.

One can only imagine what would have happened if Susie B had been able to feast her eyes on the sleek and powerful two-wheelers of today. With the promise of the wind in her bonnet, she would in all likelihood have climbed right off her hobby horse, lifted all 21 layers of her frock and petticoats, leapt astride and gone off at full throttle into the sunset. 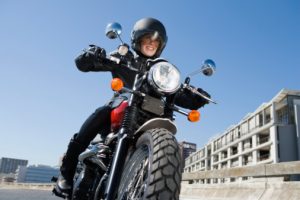 It appears that successful (and wise) women are doing exactly that today (fortunately for them, usually without the bother of the petticoats). We are often advised by the glossies to indulge in ‘me’ time, to de-stress in a gently-fragranced bath or succumb to the soothing hands of a masseuse. But tor the new generation of executive women, biking as a form of R&R might just be overtaking a day at the spa.

It was put succinctly by a stunning blonde CEO who used to have stress issues until she bought a motorbike. She says, sometimes it takes a whole tankful of petrol before you can think straight — but it always works. And the cost of this tankful doesn’t mean mortgaging the house.

So, what’s the trend in the market? How many of the newbies (those new to motorcycling) are women? Lots, according to the motorbike dealers we spoke to. Harley Davidson, Honda, Suzuki, Kawasaki and Yamaha have all recorded increases in the sale of bikes to women — some up to 20% in the last year or two.

From a recreational point of view, women are increasingly finding that motorcycling provides a new avenue for leisure time with their partners and children. Approaching motorcycling, particularly off-road riding, as a family leisure activity is a growlng trend among South Africans. Harley-Davidson events, such as the Ladies’ Breakfast Runs held every year on Women’s Day (and open to all sorts of bikes, scooters and of course the larger cruising bikes), attract a large contingent of women and stimulate interest in biking.

There are basically two kinds of bikes in the ‘on-road’ category. There are road bikes, like the cruiser or touring bike, which is a slower and heavier bike for longer distances, and the racing bike, for when speed and acceleration is more your thing. And then, my personal favourite, the off-road bikes, for when traffic is not an issue.

So, how do you choose the best bike tor you? Honda SA says that you shouid do thorough research. Consider the overall package carefully. Are you buying just a bike? Or are you iooking for a new lifestyle opportunity?

Garvie says, ‘Find out which category of motorcycling most appeals to you, what your physical capabilities are as a rider and what you are willing to spend. Then, visit a dealer and get acquainted with the individual models. Sit on the bikes, test the controls and narrow your choice to the models on which you feel most comfortable.

The important thing is that you are not intimidated by the dimensions or riding position of the bike and that you feel confident in the saddle. You may think it’s obvious, but one of the most important things is making sure your feet can touch the ground easily, otherwise you’ll fall over at robots — not cool — or have to balance your bike on tiptoes like a ballet dancer en point. This crotch to underfoot measurement is very important so make sure you measure up and can put your feet comtortably on the ground.

Neville Cragg, Saies Consuitant tor Suziki South, feels that you shouid get something that is easy to controi, not too heavy a bike that is physicaliy manageable. He says, ‘Don’t bite off more than you can chew too soon — build your confidence slowly rather than trying to keep up with bigger bikes. Too much power too soon is a recipe tor disaster.’

lf you are interested in buyinga bike, whether for commuting or recreation, you need a motorcycle licence. The learner’s test is similar to that for a car licence but with additional questions. You need to be 18 to ride a bike over 125cc and lessons are highly recommended.

There are tutors around who will teach you to ride, one-on-one, and guide you through your test — your dealer will be able to recommend a good teacher.

I was privileged enough recently to enjoy a little two wheel sojourn along the coast on a beautiful winter’s day and I for one arn truly inspired. l’m not exactly a newbie, having owned an off—road bike until about two years ago, but I’m definitely a newIy—enthused wannabe.

My only dilemma is whether to take a pillion along or not… The thought of a bit of well-honed eye candy clinging to me with the gratitude of a recently-orphaned vervet monkey, while I open the throttle for a temporary face-lift, appeals to the latent suffragette in me.

So, go girls. It’s liberating, empowering and fun. Plus, if you’re going to have a second set of wheels for the weekend, it’s a lot cheaper than a convertible. And then of course, there’s all that leather. As the wise women say: Four wheels to move the body; two wheels to move the soul.