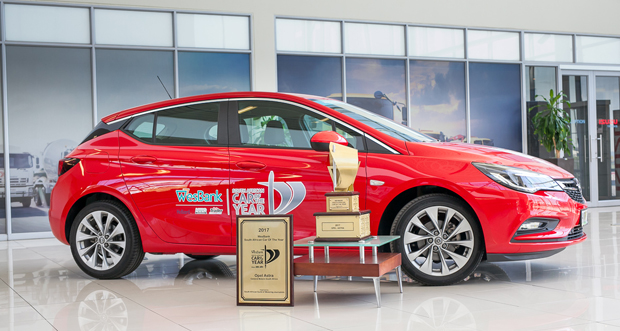 The latest accolade, which was announced at an industry banquet at Kyalami on March 15, comes on the back of a multitude of awards both here and abroad for the 11th-generation Astra. The most significant of these is the European Car of the Year for 2016, widely considered the most prestigious and important prize in the world of motoring.

It also picked up the 2015 SafetyBest Award and the 2015 Golden Steering Wheel Award.

Also read: 6 things to love about the new Opel Astra

The Astra’s all-around excellence has not gone unnoticed on the local front either and since its April 2016 launch, Opel’s C-segment hatchback has received accolades including being voted Independent Newspapers’ Best of the Best for 2016.

Two of its key strengths are exceptional efficiency in terms of packaging, aerodynamics, weight reduction and drivetrains, but also the way it has democratised technology. It is packed with segment-leading safety, infotainment and driver aids usually reserved for luxury vehicles. The COTY judges, all members of the SAGMJ, recognised the Astra’s overall excellence but specifically praised its build quality and dynamic ability – its safety-boosting road-holding and handling characteristics were singled out.

Other categories which the judges applied their minds to before allocating points to the Astra and other finalists included Exterior Design and & Styling; Interior Use of Materials; Interior Layout; Technology; Engine Performance; Gearbox & Transmission; Engineering Integrity & Build Quality; Ride Quality & Refinement; Steering & Handling; Affordability; Value for Money; and Overall Excellence.

Opel is also no stranger to Wesbank/SAGMJ COTY glory and in the early, to mid-1990s it went through a purple patch with no less than three COTY crowns. The Astra was the pick of the bunch in 1995 and while it was a significantly different car to the current one, it also strived to offer the C-segment buyer a similar blend of quality, value and efficiency.

More than 20 years later, the Opel brand is on the up and up:  In the last three years, Opel sales in South Africa increased by 9.5% in a market that has declined by 15.5%. Opel nameplates such as Adam and Corsa have also had their share of the limelight, with COTY finalist status and independent awards.

Speaking at the awards, Nicholls said, “As a company, Opel has always been at the forefront of innovation, embracing new challenges by offering unique solutions to the motoring needs of a diverse customer base.”

He further said that the brand is about to embark on a new journey this year which has the potential to make it a major player in Europe and other key markets around the world.  “Opel owners can be assured that all our customers will continue to experience the same level of service and after sales support, they have become accustomed to.”