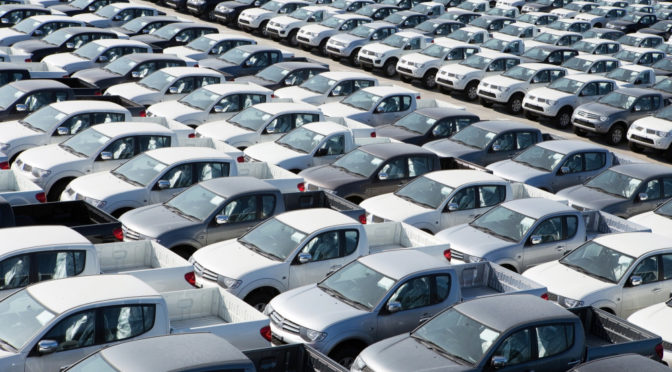 South Africa’s new vehicle sales continue to drop with only 42 907 new vehicles sold this past month.

Wesbank reported that respective drops of 12.9% and 5.3% for passenger cars and light commercial vehicles were seen and a 10.3% fall for total industry sales.

According to IOL, The National Association of Automobile Manufacturers of South Africa (Naamsa) said that sales figures were ‘unsurprising’.

However, Naamsa said that despite the drop in domestic sales, new vehicles for export are expected to grow.

Rental sales in May were down by 5.9%, but Wesbank stated that this channel’s year-to-date growth is still at a healthy 48.7%. New vehicle sales through the dealer channel remained relatively robust, ending the month at 2.5% down on the same period last year.

“Although the market continues to struggle, consumers have shown that they are willing to buy quality products from highly reputable brands,” said Simphiwe Nghona, CEO of Wesbank Motor Retail. “New model introductions by OEMs are helping to boost sales in an otherwise weak market, which has seen a definite shift to the pre-owned space.”

WesBank’s own data reflects the performance in the dealer channel. Consumer demand for credit remains robust, with new vehicle sales applications down by only 0.2% in May. However, the continued shift to the used market is evident.

The weaker Rand has resulted in continued new car price inflation and this has caused consumers to shift to the used car market. Consequently, demand for used cars – as measured by application volumes – grew 9.5% in May. These supply demand dynamics have subsequently seen used car prices increase and in May the average transaction value for a used car financed through WesBank grew by 7%.

WesBank’s forecast for 2016 sees total industry new vehicle sales declining 12% for the year. This will also be fuelled by changes to the interest rate and higher living costs faced by consumers. This year the interest rate has been hiked by 75 basis points, while petrol and diesel prices have risen 7% and 12%, respectively.

“In the current market consumers will find themselves either having to hold onto their cars for longer, before replacing them with a new model, or taking their budget to the used market,” said Nghona. “This focus on affordability highlights the pressure on consumer budgets. The cost of motoring is on the rise, and will start playing a bigger role going forward.”