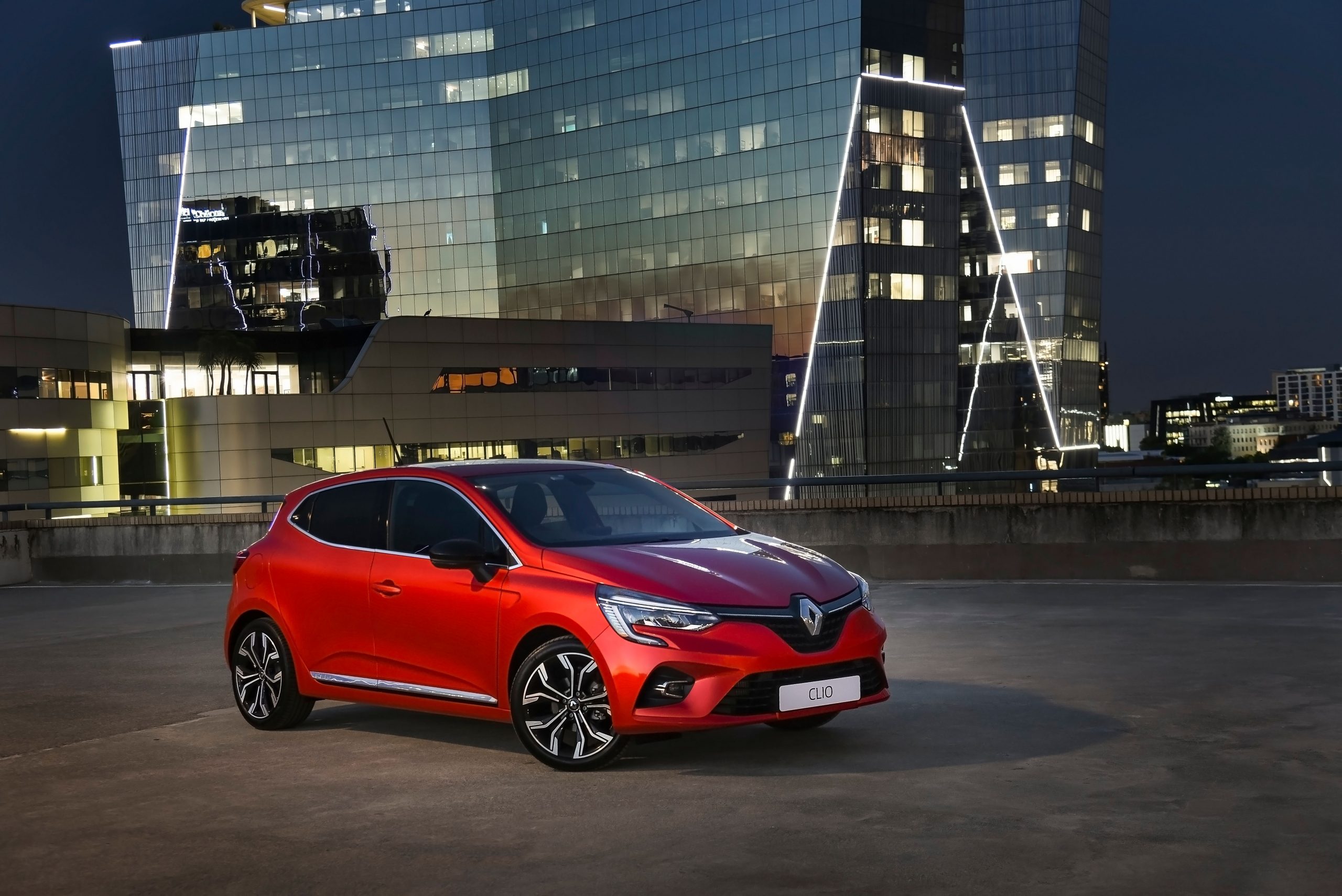 The iconic Clio model is almost synonymous with the Renault brand itself.  To think that the Renault Clio celebrated its 30th-anniversary globally in 2020 already.

Over 30 years of stylistic and technological evolution, over thirty years of slices of life.  Since its first introduction, the Clio became Groupe Renault’s best seller throughout the world, with more than 15 million units sold globally. 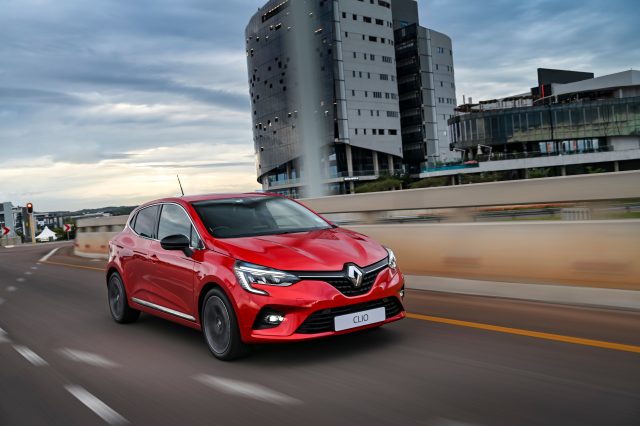 The history of the Renault Clio in South Africa doesn’t span across three decades, only having made its first appearance in South Africa in 2000 with the second generation of Clio.

Nonetheless, it has received just as much love from its loyal SA customer base and numerous accolades within the industry, both in Europe and locally, to name a few.

The Clio model offers first class reliability, a claim backed by Independent and in-house studies internationally.  Its quality has been applauded by leading global authorities, thanks to its extremely rigorous build quality making it one of the most reliable cars in the B-segment. It continuously delivers on offering a high value proposition, with its great comfort, handling, engine and safety credentials, as well as a host of features generally associated with C-segment vehicles. 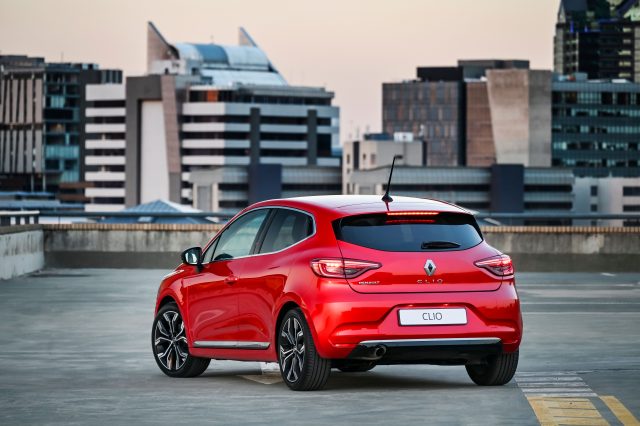 Over the years, Renault has succeeded in preserving the DNA of this star city car, now offering a fifth generation of Clio. Even more contemporary, more athletic, the Clio V takes up assets of the four previous generations who built the saga:

The Renault Clio model has proven to be a resounding success within the local car market since its initial introduction in 2000, with over 76,700 units sold. 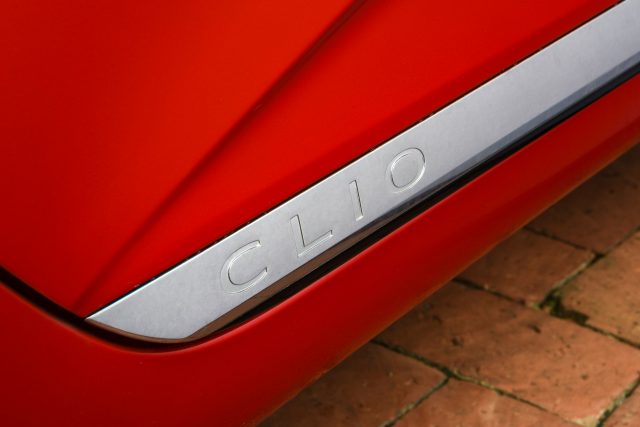 To think that over 34,800 Clio IV vehicles were retailed in SA since 2013.  This generation of Clio was embraced by the vehicle industry and highly celebrated globally with a string of prestigious nominations:

Enter the All-New Clio V, which is just phenomenal in every way, boasting an exterior evolution and interior revolution. Every bit a Clio, but just more Clio than before.

From the outset, the New Clio exudes dynamic and attractive styling marked by its sensual lines, dynamic profile, sculpted sides and assertive presence.  The sculpted side panels are extended to the front wings and the roof is lower for a perfect body/ glass surface balance, giving the impression of a coupe-like design.

With its finessed finishes, it combines modernity and robustness with its broader and raised radiator grille, and signature C-shaped LED Daytime Running Lamps (DRLs) and Headlamps.  With its broadened shoulders, the updated rear styling gives the new Clio a more imposing look, with larger LED rear lights built into the tailgate.  The finely integrated chrome finishes and the concealed rear door handles give the Clio a feel of elegance, and a coupe-like profile.

The New Clio is more compact, more aerodynamic and lighter than the previous generation. In spite of the slightly smaller dimensions, the Clio V offers more spaciousness. 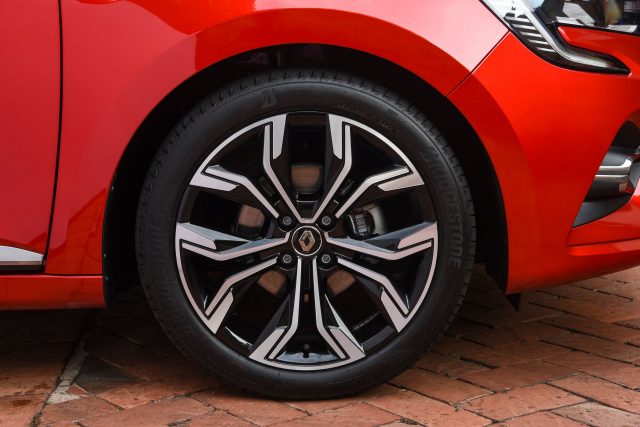 An exterior evolution of note – Although instantly recognisable as a Clio, 100% of the parts are NEW.

The driver is truly the focus in New Clio and its functional features, in a Smart Cockpit, which is high quality and sophisticated.

New Clio has undergone a complete revolution on the interior, offering quality materials and finishes.  The new high-tech driver-orientated cockpit is distinguished by its cocooning seats and the multi-sense customisable ambient lighting, allowing for heightened driving pleasure.

The high-tech experience is further enhanced by a customisable 7” TFT digital cluster, Electronic Parking Brake (EPB), and a prominent 9.3” Easy Link multimedia touchscreen, the largest screen in its category.  This infotainment system is perfectly integrated with the Renault CONNECT universe.  The EASY LINK system, compatible with Apple CarPlay or Android Auto, allows for easy access to all your multimedia content on your mobile device. 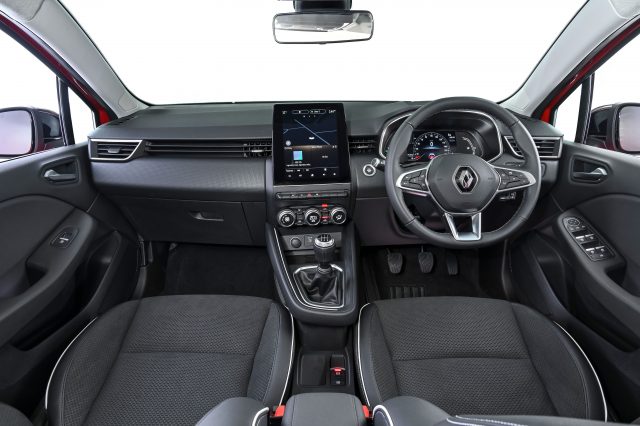 The Clio is equipped with an entirely new 1.0 TCe 100 Petrol Engine.

The 3-cylinder turbo offers 74kW of power and 160Nm of torque, an improvement of 8kW and 20Nm vs. Clio IV, with CO2 emissions of 132g/ 100km.  It also takes advantage of the latest technological developments to lower fuel consumption by 10%, which puts it at the highest level of the market.  New Clio yields fuel consumption from only 5.7L/ 100km* (*Combined fuel cycle).

Thanks to its dynamic chassis, and its direct and precise steering, a more intuitive driving experience is guaranteed.  The suspension and soundproofing have also been upgraded for the comfort of all, and then there’s the audio system with its 6 speakers offering a rich ad immersive sound experience, adding to the comfort of the drive.

The Clio V is also equipped with keyless entry and keyless ignition, by means of a Renault Smart key card.

From one generation to the next, the Clio has always offered customers the best level of safety

The Clio provides the most modern and effective active and passive safety systems, including Lane Departure Warning (LDW), Renault LED 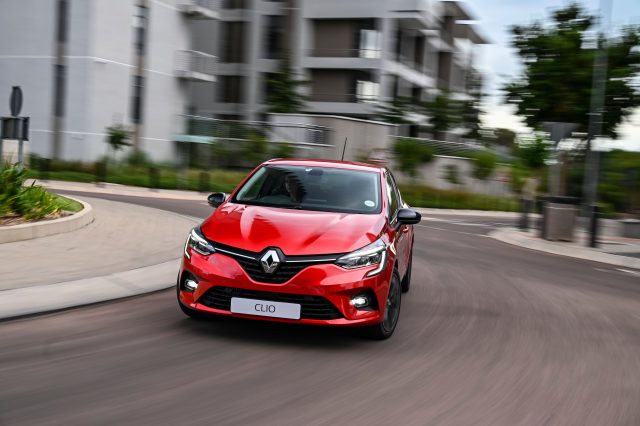 The new platform offers an enhanced passenger compartment and energy absorption zones, with 6 airbags** as standard:- an adaptive driver airbag that modulates its deployment according to the position of the driver’s seat, a passenger airbag, thorax basin side airbags, and curtain airbags in the front and the back.

(Prices are inclusive of VAT)