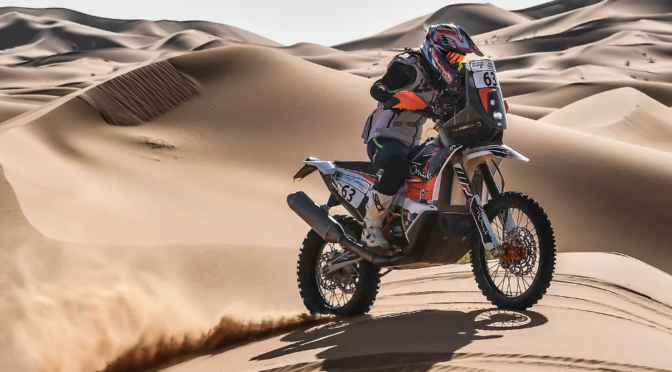 One of the many reasons to love Dakar is that its gender neutral entry requirements. If you can make it through the grueling entry races, you’re in, it’s about talent. Over the years the Dakar has been run across various locations and has had many successful female competitors, the most notable being Jutta Kleinschmidt who won in 2001 in a Mitsubishi Pajero Evolution, contributing to Mitsubishi’s title as the most successful manufacturer in the history of Dakar. 2020 brings a new honour to Dakar as not one, but two women from South African take it on. Below we look at the field of female entrants at Dakar 2020.

The first of the two South African women to be taking on Dakar 2020, Kirsten has been riding since she was a youngster. A specialist in technical and extreme riding conditions, we have plenty of faith in her ability to do South Africa proud. Her list of achievements includes the Roof Of Africa gold class finisher, taking the ladies trophy numerous times, Sea to Sky Turkey, Red Bull Romaniacs and finishing 2nd in X-Race Namibia.

The second of the two South African women taking on Dakar 2020 is proof that dynamite comes in smaller packages. At 1.58m in height, she may be the smallest contender in Dakar 2020 though that does not deter Taye, who acknowledges that lifting the bike will require some adjustments in her technique. No stranger to competition and beyond capable, she holds multiple MSA Offroad and Cross Country titles with 169 races under her belt, she has a 96% finish rate. We can’t wait to see what Taye can do in Dakar 2020.

Riding bikes unofficially since she was four-years old and officially with her parents’ consent since she was seven-years old she’s no stranger to the world of competing. At the age of 12 she won the inaugural Women’s Time Trial European Championship against more experienced riders. She has since competed in multiple championships around the world, often competing as the only woman and winning the field.

Her debut in the Dakar was in 2011 onboard the Honda CRF450X motorbike for Team Arcarons, winning the female class. 2012 she moved to brand-new outfit, team Gas Gas, despite an injury she placed first in the female class again and was the only woman for the year that completed the Dakar on a motorbike.

2020 she will be riding with team Gas Gas aboard her KTM450, though Laia has expressed an interest in moving over to the car category down the line, we’re excited to see what Laia brings to the new terrain in Saudi Arabia.

An opening quote of, “The greatest pleasure in life is doing what people say you can’t do,” Mirjam is our kind of woman. She’s been riding bikes since she was four-years old, at 22 she competed her first Dakar with 18-years of riding experience under her belt and considers competing in Dakar a full-time job. When she’s not on the bike she’s the assistant team manager of HT Rally Reid team.

2020 will be Sara’s second Dakar on the bike, and not just in any class either, but the extremely tough Malle Moto/Original by Motul class, where there is no support crew, just you, a box of your tools and a tent, completely unassisted. Malle means trunk in French and refers to the 80-litre trunk you’re given to store everything you need for the race. In 2019 Sara was one of two women to enter the Original by Motul class for the first time, an electrical problem on Stage 4 forced her to retire. Sara is back for Dakar 2020 and stronger than ever.

Dakar 2020 will be Cristina’s fourth consecutive Dakar, in 2017 she became the first female driver to finish a Dakar Rally, working her way from a 44th place to finish 26th in 2019. Cristina hopes to finish inside the top 25 this year though doesn’t underestimate how tough the Saudi Arabia terrain will be and ultimately just wants to complete the Dakar. Her Mitsubishi Eclipse Cross has had multiple upgrades for 2020 though, as Cristina herself says, “You have to have a bit of luck and rack up the fewest number of mistakes possible”.

A Dakar veteran, Camelia has earned her place in the Dakar Legends circle completing ten back-to-back Dakar races. A professional skier, this Italian is an accomplished mountaineer too, conquering Mont Blanc in 2002. Originally Camelia started Dakar on quad bikes before moving to SSVs in 2018 with Rosa Roma (Nani Roma’s wife) as her navigator. Known for donning a pink helmet as a tribute to all the women who couldn’t ride or pursue such adventures because of obligations, the pink helmet has evolved to a full pink livery in honour of the fairer sex.

This will be Annett’s second Dakar run, stepping in for the injured Rosa Roma. A physiotherapist by day she works with the X-Raid MINI Team and on the side spends time on bikes and in cars as a driver. Her driving skills in 2019 garnered a 14th place finish in the cars category for her Dakar debut, immediately gaining the attention of high-profile teams This will be her first outing as a navigator and we have no doubt her and Camelia will make a formidable team.