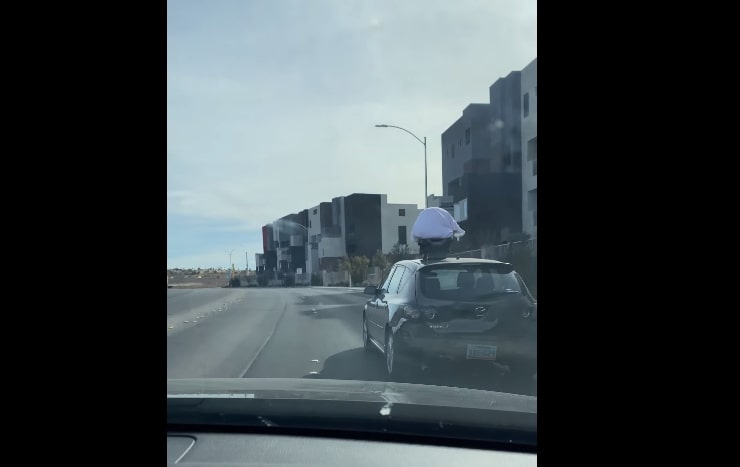 A video of a  mom driving her car while her baby’s seat is on the roof has caused great backlash on the internet.

The video begins with a woman filming the dangerous incident shouting: “Hey, hey there is a baby on your car!” with hope to get the attention of the mother to stop the vehicle. Several other road users on foot or in vehicles try their utmost to alert the woman about the baby on the roof.

The American mother and her accomplices are known pranksters but this joke may have taken it too far as an accident may have been caused – or worse.

One social media user commented saying: “These fake videos are getting worse day by day. They are putting other road users at risk. Someone can do something stupid to stop her driving for sake of the baby unknowingly these people are only making videos for there contents and likes on social media. Please stop it.”

The question remains, was there really a baby in that seat or not? Even so, this incident is viewed as a huge risk to other road users who may be influenced by this.

Another social media user said: “For one I don’t believe this at all. The way she was driving that would’ve fell but it looks like it’s attached to something on top of the car. But anyway if I was following her and she wouldn’t pull over. I would have called the police and I would follow her until the police came. But anyway if I saw something like that on the highway and I wasn’t near her car I still call the police. Because she would’ve been arrested for doing something like that. She didn’t say “oh my God my baby”, nothing. All she could say was don’t touch my baby.

“So if this is real she should be arrested for endangering a child. But again I don’t believe this is real because that baby would’ve fallen off that car the way she was driving. Also, they never showed the baby and it wasn’t crying. So I don’t think there was a baby in the car seat but, again if there was she should be arrested not only if there was a baby in the car seat but just for having a car seat on top of her car. And if this was a joke it wasn’t funny. the people that were videotaping this while trying to warn her should send the tape to the cops.”