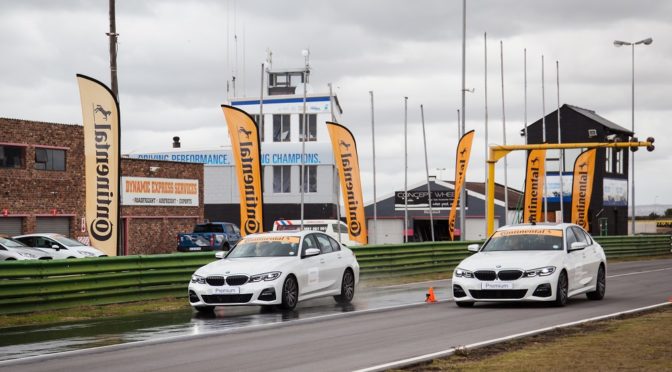 We assume that all tyres are created equal, we trust the salesperson to sell us the best tyre for our car and budget. Or we think we know better and ignore their advice, buying the cheapest tyre.

Let’s equate tyres to shoes. You need sandals, your budget is R200. You buy the cheapest pair for R59.99, they look pretty and all your friends will compliment you on your savvy shopping skills. However, your feet will hurt, a strap will break and at many points there will be multiple almost slips as the budget sandals have zero grip. Like budget tyres. As we previously wrote, not all tyres are created equal. 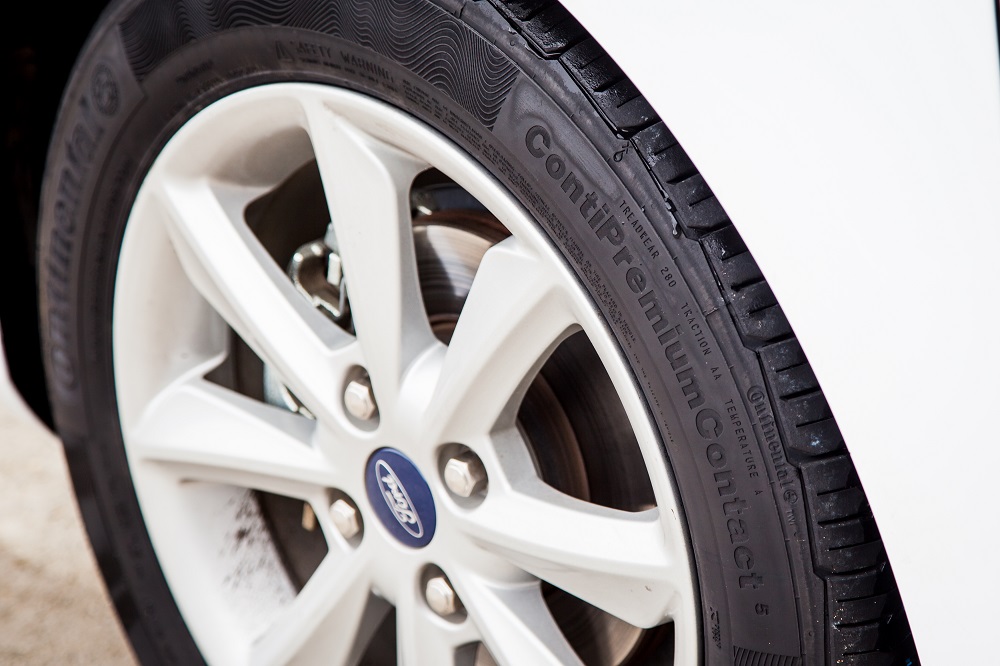 After learning how the tyres are made we headed over to Aldo Scribante race track for some eye-opening tyre testing. To demonstrate the difference between premium tyres and budget tyres there were two models of each car driven. One shod in Continental Tyres and the sister car shod in the budget tyre (with the name filed off) to give an equal comparison of performance. A variety of scenarios were simulated in identical conditions with identical cars with the two different tyre sets. The plethora of vehicles to play with included Ford Fiesta 1.0 EcoBoosts fitted with 16-inch ContiPremiumContact 5s and others wearing budget tyres. Likewise, BMW 320is fitted with 18-inch ContiSportContact 5s and others wearing budget tyres of the same size.

‘The purpose of this event is to test the capabilities of different types of tyres, including the tread design, compound and construction to see what the differences are in terms of performance and safety,’ says Ryan Visagie, Product Communications Manager, CTSA (Continental Tyre South Africa). ‘When people buy a new car, it is usually equipped with a tyre specifically designed for that vehicle, and is optimised to perform under all driving conditions. However, when they come to replacing the tyres, owners will often make an uninformed decision and buy a tyre that is significantly cheaper than the car’s original tyres. As a result, they will not benefit from the same levels of performance or safety. Unfortunately, they only get to experience this in an emergency situation where the cheaper tyre is simply not able to perform at the same level as the original equipment tyre,’ adds Visagie. 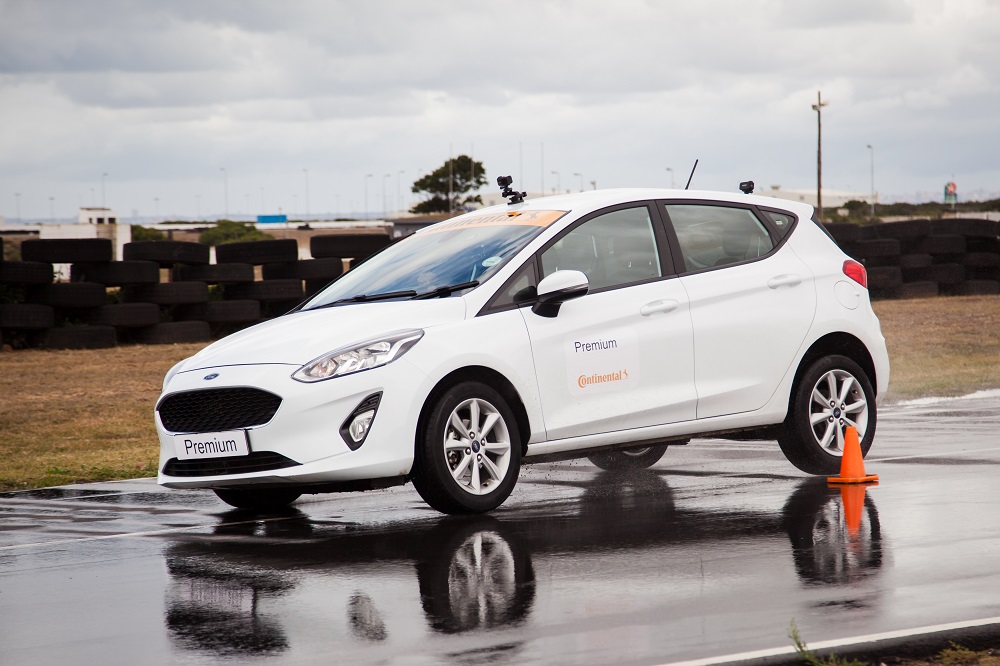 We started our test in the Continental-shod Ford Fiesta, which displayed sure-footed handling in a wet slalom and emergency braking test. Thanks to the tyre’s macro-block tread design, optimised shoulder flexibility and rigid sidewall, it handled the wet impressively with no fuss at all almost as if the track was dry. The same circuit in the budget-shod car provided some moments of going for the grab handles, the low-grade tyres were even squealing in the wet, a sign of their poor compound and construction. The wet slalom was like playing a game of Twister, only with tissue oil on your palms. We use the example of Twister because the amount of steering input required to complete the slalom felt like its own little micro-twister. Worse still, the Fiesta’s electronic driver aids were intervening throughout to try save the out-of-control situation. But this made little impression with such poor performance from the budget tyres.

The BMW fared the same, although arguably even worse because of the higher performance demands put on the budget tyre by the rear-wheel-drive configuration. Through the wet slalom we couldn’t maintain 80 km/h because the steering response from the front end was so poor, and in a wet hairpin bend the understeer and oversteer – happening at the same time virtually – bordered on catastrophic. Most spun or understeered off the circuit completely. Our conclusion is a simple one. 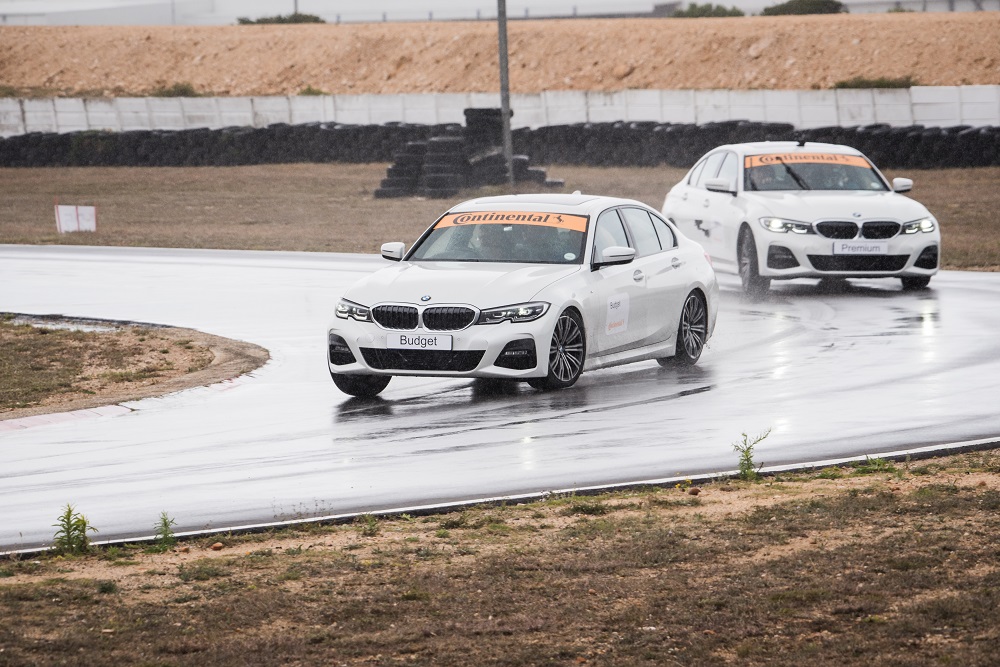 It’s a tough economic climate, when customers need to buy cheaper tyres for their car than originally fitted, and sure, that might be acceptable on an older or entry-level car. However what we experienced on track, putting budget tyres on a high-performance car like the BMW is dangerous. The drop in performance of the BMW on budget tyres was eye-opening, it’s simply not worth the saved rands.

What keeps you on the tarmac

Remember that out of the entire wheel of rubber, only four small patches the size of your hand make contact and keep you on the road. CTSA advises against purchasing tyres purely on price. ‘If you can’t afford the very best tyres for your vehicle, there are more affordable options that are still of suitable quality but won’t compromise your safety. The General Tire brand, owned and manufactured by Continental, is the ideal alternative for price-conscious buyers. In the passenger car segment, the General Altimax One and Altimax One S are popular choices in the replacement tyre market,’ concludes Visagie.

In conclusion, budget for new tyres so that you’re able to buy the best tyres for your car possible, don’t go for the cheapest set on offer and expect that to be good enough. As we’ve seen after a day spent testing, even good drivers can’t make a great car perform well on budget tyres.