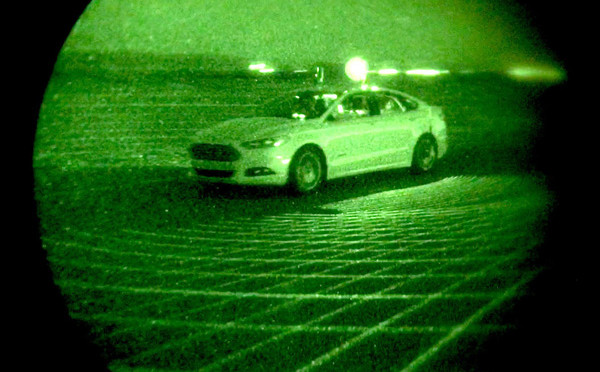 The Ford Fusion Autonomous Research vehicles have proved that they can see better in the dark than we can!

To mark the next step of delivering fully autonomous vehicles to customers around the globe, a Ford Fusion hybrid navigated its way along lonely desert roads at Ford Arizona Proving Ground in complete darkness.

Also read: Could you react this fast while driving at night?

According to the National Highway Traffic Safety, the fatality rate of passenger vehicle occupants is about three times higher during dark, nighttime hours than it is during the day.

“Thanks to LiDAR, the test cars aren’t reliant on the sun shining, nor cameras detecting white lines on the asphalt,” said Jim McBride, Ford technical leader for autonomous vehicles. “In fact, LiDAR allows autonomous cars to drive just as well in the dark as they do in the light of day.”

The ford self-driving cars use high-res 3D maps containing information about the road, geography and topography using landmarks like buildings and trees to navigate its way through the dark.

The vehicle was tested and monitored by Ford engineers with night-vision goggles both inside and outside the car to confirm that the LiDAR indeed works.

“Inside the car, I could feel it moving, but when I looked out the window, I only saw darkness,” described Wayne Williams, a Ford research scientist and engineer. “As I rode in the back seat, I was following the car’s progression in real time using computer monitoring. Sure enough, it stayed precisely on track along those winding roads.”

The plan to take Ford to the next level involves key elements of Ford Smart Mobility .