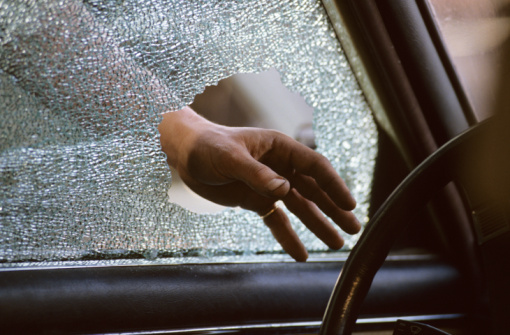 Installing protective window film specially made to prevent smash-and-grabs is a good investment. There are a range of security films available, varying in thickness and strength. A 200-micron two-ply system is the one most recommended for smash-and-grab protection. Ordinary smash-and-grab film is normally 100 microns but the thinner systems don’t give the glass enough structure to hold it in place after it’s been hit. With thinner systems you could end up with your car window on your lap.

If you want to go big with your window protection, you could try an impressive bullet-resistant 450-micron four-ply system. These have successfully stopped a .38 Special bullet on ordinary car glass. 450-micron film is the best protection available in safety films but it’s thick and can’t be used on all cars. Unless you drive an SUV or a 4×4 it’s best to stick to 200 microns.

Prices will vary depending on the size of your vehicle and how many windows you apply the film to. Be aware that some films are merely shatterproof and not anti-smash-and-grab – the two terms are not synonymous. Before you buy any supposed smash-and-grab product, ask how it works and be informed about the technology.

If you look at the marketing material for some window films available you won’t find information on how the product actually protects people. Instead, they go on about less-important features such as UV protection, and people are fooled into a false sense of security because they bought a so-called “anti-smash-and-grab” product.

Tinted windows could also discourage thieves from breaking into your car, because they prevent thieves from seeing the contents. However, tinting isn’t a foolproof solution. There are legal restrictions about how dark the tint can be so the driver can still see properly, and while there is some protection from not being able to see in, this is  limited. Getting a tint and film on your windows is the best combination for better protection.

GSS is a supplier of protective window film in South Africa.