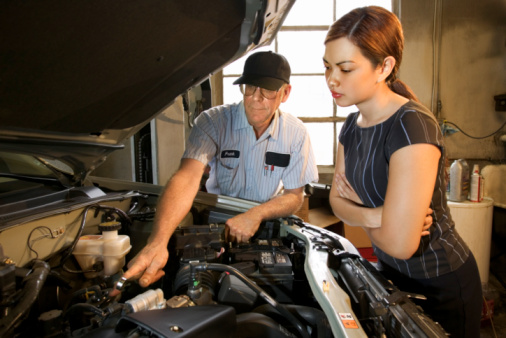 If you’re like most of us, the only things you recognise when you open the hood of your car are the oil dipstick and the water reservoir. So when you go to a mechanic, it can be really difficult to decipher what sounds like gobbledegook.

Fear not! Here is a quick and easy guide to explain what all that stuff under the hood is doing there.

First up, it’s going to be useful to know how your car’s engine works.

The main purpose of an engine is to convert petrol into motion so that your car can move. It does this by burning a small amount of petrol in an enclosed space. That’s why it’s called an ‘internal combustion engine’.

When petrol burns it creates gasses that take up much more space than the petrol did. In an enclosed space, like a car cylinder, this creates pressure that can be turned into movement. If you do this over and over again, hundreds of times a minute, this movement can actually propel something as heavy as a car or truck.

Almost all cars currently use what is called a four-stroke combustion cycle.

The four strokes are:

Here are all the parts of the engine involved:

The cylinders are the core of your engine. Most cars have more than one, and they can be arranged in a single row (inline), at an angle to each other (V), or horizontally opposite one another (flat).

This supplies the spark that ignites the air/fuel mixture.

Your intake and exhaust valves let in the air and fuel and let out exhaust fumes. Both valves are closed during the compression and combustion strokes.

This is the cylindrical piece of metal that moves up and down inside the cylinder.

TIP: If your car constantly needs oil, it’s probably because your piston rings are old and no longer seal properly.

The crankshafts convert the up-down motion of the pistons into a circular motion.

The sump surrounds the crankshaft. It contains oil, which collects in the bottom of the sump. If your piston rings are old, this oil can leak into the cylinder.