While 2017 has seen a number of new model SUVs introduced to the market, Lexus decided to give its iconic SUV, the NX, a bit of a nip and tuck to stay ahead of the game.

KZN, Karkloof – Last week (1 December 2017) Lexus treated us to a weekend at KwaZulu Natal’s Karkloof Safari Lodge and Spa to celebrate the launch of the updated NX. When you’re on your way to a weekend filled with pampering and luxury, there’s no better way to get there than in comfort and style, which is exactly what the NX provided as we drove from Durban’s King Shaka airport up to Karkloof.

Did you know? The NX is responsible for 29% of Lexus sales 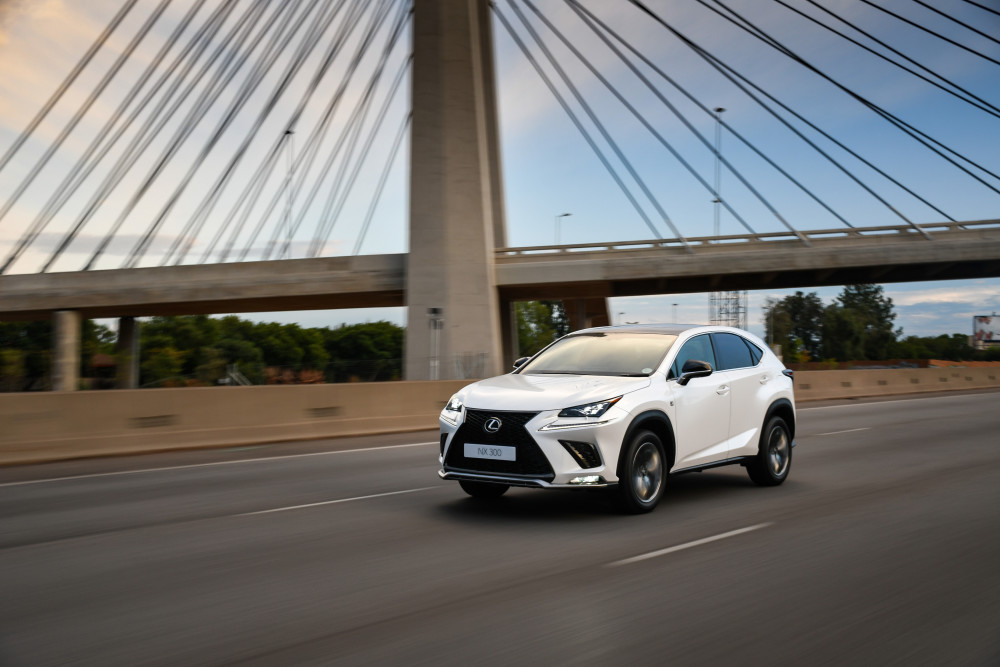 Changes to the NX models include a few minor cosmetic enhancements both inside and outside, new drive trains on certain derivatives, safety and tech upgrades, improved suspension and stability, and a new naming convention to highlight Lexus’ global strategy.

Up until 2017 it was referred to as the NX200. The name change replaces the 200t moniker with “300”. Lexus explains that although the NX houses a 2.0-litre turbocharged engine, the new 300 badging bears reference to offering an equivalent power output to that of a 3.0-litre powerplant. “This has been adopted to achieve parity between the petrol and hybrid engine models’ badging convention,” says the automaker.

Focus on improvements to the NX range is more to do with tech and equipment enhancements, so you might not notice too much difference on the NX’s exterior. It still maintains its sporty character, while minor changes just give it a bit more of a modern touch. These include new headlamps, a bold new front grille and chrome frame, an altered side grille, bumper and lower bumper elements. All models receive new LED combination lamps at the rear.

While the entry-level model (NX 300 E) comes standard with 17 inch wheels, the F Sport models have a special design on their 18 inch alloy wheels. The mid-grade EX variants are fitted with roof rails while the top-of-the-range F Sport receives Dynamic headlamp levelling. 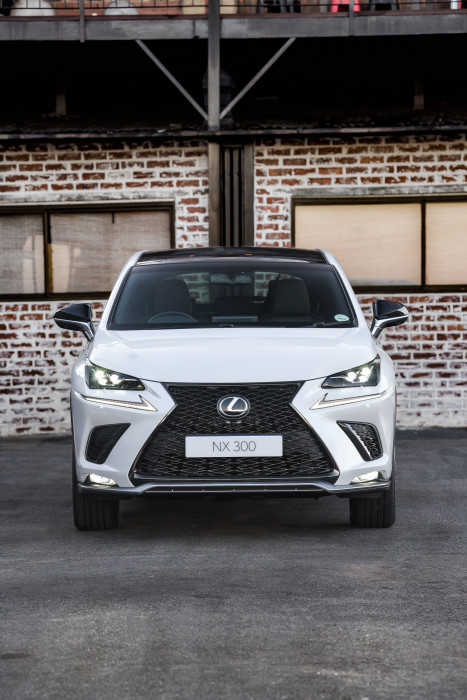 The cabin of the refreshed Lexus NX offers user-friendly features and modern design elements to give it a bit of a cleaner and more sophisticated feel. Satin chrome and metallic finishes add to a sleeker and stylish interior, and we got to experience the NX from all seating locations (driver, front passenger and rear) during the launch. While travelling from King Shaka airport up to Karkloof there was more than enough time to swap seating arrangements and I found sitting at the rear just as comfortable as up front.

A highlight of the NX’s cabin is its new 10.3-inch display audio screen with a pleasingly sharp and clear display. The EX and F Sport models are equipped with Satellite Navigation as standard. When sitting up front, you’re met with a simple yet stylish dashboard that incorporates minimalistic and easy-to-use dials and settings to suit your preferences, such as a climate control panel and air-conditioning switches which have been grouped according to operations.

To operate the NX’s infotainment system, Lexus has included a touch/track-pad at the base of the centre console (next to your thigh). It took a while to get used to it and I feel it’s a bit outdated compared to other more modern and user-friendly features in the cabin, and I still prefer a good-old rotary dial, but perhaps after a week or two you might become more used to it. 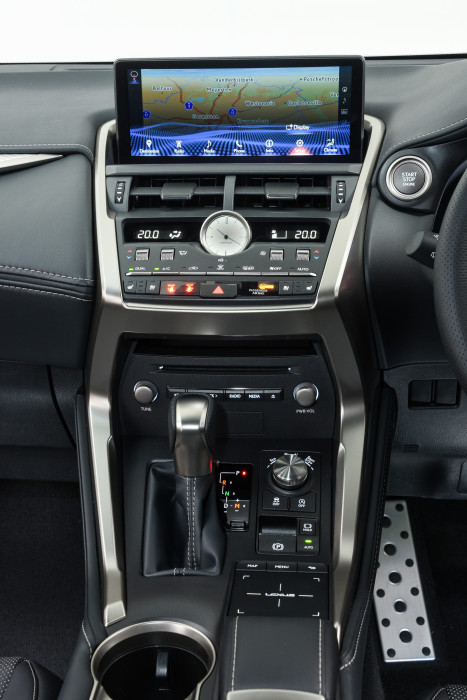 Also in the centre console, is a removable vanity mirror, that may or may not prove useful. We found it to be somewhat of a random feature in the NX, but perhaps passengers in the back might find it useful if a make-up retouch is needed during a long trip.

Overall, the NX’s cabin is a truly comfortable place to be, and certainly the type of environment you want to find yourself in when you’re on your way to a fancy dinner venue in the city, for example.

The new NX is fitted with a 2.0-litre turbocharged engine that offers 175 kW and 350 N.m of torque, while the hybrid-powered NX300h uses a 2.5-litre four-cylinder engine paired with an electric motor, delivering a total system output of 150 kW. This is mated to a six-speed automatic transmission that gives smooth and quick-changing gear response.

I had the chance to drive the entry-level NX, as well as its range-topping F Sport model while on launch and what stood out for me was how much the entry-level had to offer. If you’re not overly sensitive about driving dynamics, you’ll be pleased at just how much you can get on the entry-level E grade – there really is so much as standard! To name a few, the entry-level NX offers Cruise Control, Climate Control (Dual Zone), Tyre Inflation Pressure Warning, Wireless Charging, synthetic leather upholstery and power adjustable seats. Move up a level and the EX and 300h EX get seat heaters, Satellite Navigation and 18 inch wheels.

If you prefer a more driver-focused ride, things tighten up quite a bit when you’re driving in the F Sport’s Sport Mode with a stiffer suspension and sportier driving dynamics. Worth noting is that on paper, Lexus says that its fuel consumption value is a class-leading 7,9-litre/100 km.

The range-topping F Sport also adds a 10-speaker audio system (the others have 8), F-Sport leather upholstery, a panoramic roof and seat lumber support. These are just some of the standard features offered on these grades, check out the table below for more: 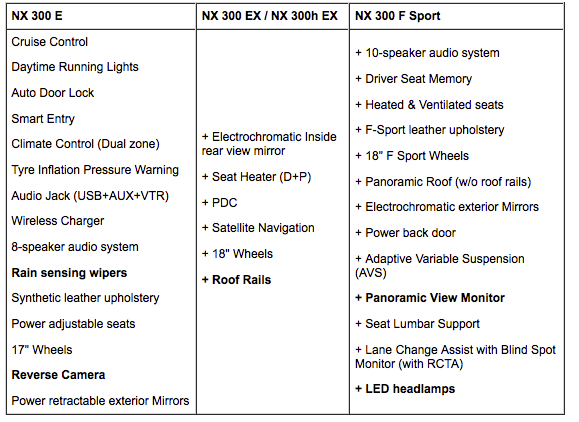 Lexus has refined suspension on the NX SUV range to enhance stability, body control and ride comfort. New front dampers also reduce friction, and the F Sport model has a unique suspension calibration. We really noticed these new qualities when driving on the gravel roads near Karkloof, where even the low-profile tyres on the F Sport seemed to make bumps and uneven surfaces hardly noticeable. Things in the cabin remained quiet and comfortable too.

Drive Mode functions on the F Sport include Eco, Normal, Sport and Sport+ as well as newly-added Custom modes that allow the driver to combine preferred driving modes depending on your preferences.

Another key benefit of the NX is that even in the base model, safety features are abundant. This is something worth considering when weighing up your options with other brands where you might have to pay extra. Safety features in the NX include ABS, EBD, Brake Assist, Traction Control, Enhanced Vehicle Stability Control, Hill-start Assist and Trailer Sway Control. The F Sport model adds Blind Spot Monitor and Rear Cross Traffic Alert. 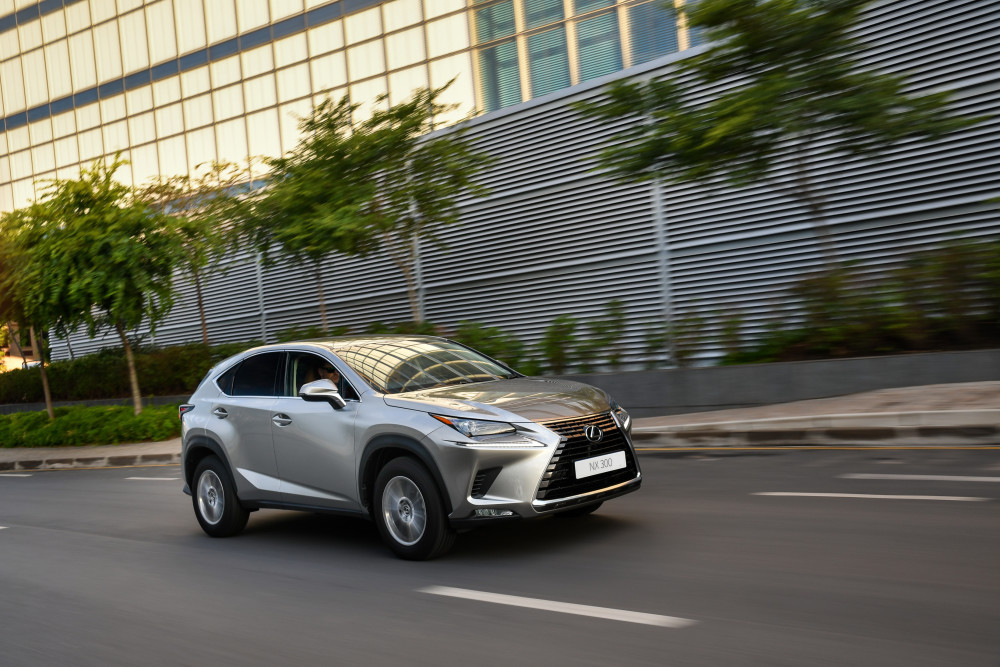 Lexus’ enhanced NX range is now sharper and better suited to a current and competitive segment, but it will be interesting to see how it fairs with strong mainstream competitors such as the BMW X3 and Audi Q5. A large number of standard equipment available on the entry-level NX 300 E is something that might entice buyers in that price bracket. Overall, if you’re in the market for a great, all-round premium crossover SUV, the NX is certainly worth adding to your list of considerations!

The latest NX models are set to reach Lexus dealerships in January 2018.

In addition customers can upgrade or extend their service/maintenance plan packages via the Lexus dealer network.