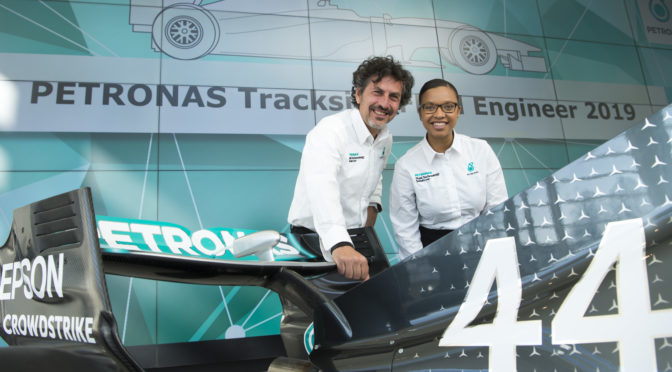 Women working in the field of motorsport is becoming more a rule and less the exception to the rule. From the pit lane to the behind the scenes, we’re challenging perceptions and setting a new status quo. Someone leading the charge is none other than Stephanie Travers. Name sound familiar?

Stephanie made headlines in March 2019 when she was selected from 7 000 entrants globally to be the Petronas Trackside Fluid Engineer (PFET) in the Mercedes AMG Petronas F1 team for the 2019 season (and onwards). Even better was the news that Stephanie hails from Zimbabwe, she’s one of us, from an overflowing talent pool down in Africa. Safe to say I began to follow Stephanie’s journey, I then got the chance to interview her. Complete fangirl moment in my life. And I like to think I kept my composure.

Let’s rewind before we get to the interview part. Petronas is a global oil and gas company seeking to push the boundaries of innovation. They’re title sponsor to the Mercedes AMG Petronas Motorsport team, the team that’s so well-oiled, they’ve won six consecutive F1 and Driver’s Championships. That doesn’t happen by luck, it happens when talent and engineering combine, it takes the best of the best to win year after year, after year.

WOW: What do you do as the Petronas Trackside Fluid Engineer (PTFE)?

Stephanie Travers: I analyse the engine oil Petronas Syntium, gearbox oil Petronas Tutela, and the fuel Petronas Primax throughout the F1 race weekend. I do the fuel analysis to ensure that we’re complying with FIA regulations, to check that we haven’t got any (fuel) drums contaminated during transportation and to ensure that in filling up the fuel rigs, the fuel pump and putting fuel into the car we don’t have any contamination, and that there’s no carry over if we’ve changed the spec of fuel.

We use a gas chromatograph (WOW: looks like a large office printer to us) to do all of the above fuel analysis and it’s kind of like a fuel fingerprint. We have a pre-sample from the FIA that we’ve given beforehand, we then run the samples here at the track and compare the two graphs to each other, they need to be as close to each other as possible. This tells us that we’re complying with everything and we’re ready to go.

WOW: This spounds highly technical! What are the FIA regulations regarding fuel?

ST: They regulate everything, there’s a one-on-one number that you have to abide by. It’s pretty strict regulations, our fuel-formulation department abide by those regulations. At the track we’re just ensuring that we’re following whatever is given by the FIA beforehand, so we know what’s been approved and we’re making sure we’re at that same standard.

WOW: Have you always had an interest in the STEM (Science, Technology, Engineering and Maths) field and motorsport? Or did your career take you into motorsport?

ST: I’ve always loved motorsport from a very young age I used to watch it with my Dad and grandparents. I had cousins that were go karting, I saw them doing it, it was always something that I was really into. I grew up watching Formula 1, and was always, always wanting to watch it live, which I got the opportunity to do in university. Watching F1 live at Barcelona made it so much more real for me. After that I knew that I definitely wanted to get into F1 one day. At that point I had already started my degree in chemical engineering, knowing that it was a possible option to get into Formula 1, even though there were very few spaces in that degree. The majority of people in F1 do mechanical engineering or aerospace as the pathway into F1. I knew that I wanted to keep my chemistry going and mathematics so I chose chemical engineering with the hope of getting into F1 but I knew that if I didn’t it wasn’t the be all and end all as I would still be doing something I enjoyed.

WOW: So there was definite passion for the sport! You got into your current role of PTFE through a Petronas Talent Search, could you please tell us more about that?

ST: I saw the advert on LinkedIn and applied. After that stage I had to do some psychometric, numerical reasoning, verbal reasoning and creative thinking tests

WOW: So not as simple as put your CV in and away you go

ST: (laughs) No, that was stage 1 which I managed to pass and was asked to complete a one minute video. There were ten of us that got to that stage. I completed the one minute video answering three questions from Valterri Bottas and the team. Then I got the invite to Kaula Lumpar as the part of the final five and had the best time. There was a case-study interview which whittled us down to the final three. The trip involved an ‘Amazing Race’ through KL city center, kind of like a treasure hunt to find the CEO of Petronas Giuseppe D’Arrigo to have your final interview. 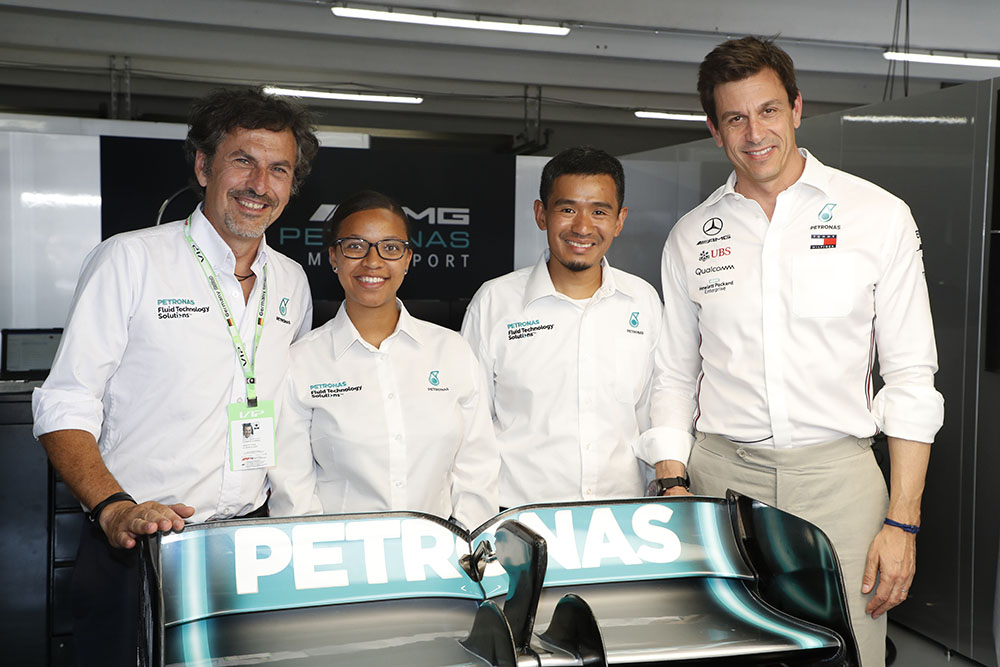 WOW: At each point in the Petronas Talent Search what were you thinking, what was your emotional mindset with each round you progressed through?

ST: At the beginning I was actually hesitant because I thought it’s global. So I said to my Dad “it’s global, I don’t know if I should even go for it?” and my Dad said “what do you mean, if you don’t go for it you’re never in the pool, you’re never going to get it that way are you?”. I got the courage to enter, from that point I said this is something I’ve always wanted to do, it being a global search shouldn’t deter me from applying. I applied and after getting through every stage it was just keeping calm and ensuring that I put myself forward as best that I could. I just focused on my own journey, especially through the video voting stage, there were nine other videos, I didn’t watch them, I just did my own, focused on mine. Once I had sent mine in and it went through to the voting stage I just waited, it was a waiting game. I didn’t want to compare myself to anyone else and just focused on my own journey the whole way through and kept calm.

WOW: For you what does a race weekend involve and in particular race day? What are the essential factors you run through in terms of the timeframe of your day from start to finish?

ST: Generally I’m at the race track by the Tuesday before the race and set up this whole lab. We have this lab in the garage for the fly away races and the truck lab for the European races. The set up includes the gas chromatograph, the fuel analyser I explained before, then we take samples of the fuel and run them in this machine. Every sample takes 30 minutes to run. We make sure every single drum is ok, not contaminated before the teams fill the fuel pumps. The next day I come in to set up the viscometer and spectrometer, machines that analyse the engine and gearbox oils. viscometer just checks the viscocity of the engine oil, the spectrometer we burn a sample of the engine and gearbox oil to analyse and monitor excessive wear in the mechanical components. If we have excessive wear in any part of the engine the machine will tell us the amount of every single metal within that oil. A combination of metals will correspond to different parts of the engine or gearbox and the team will know exactly where there is a problem. Before and after every session I take a sample and analyse the sample, we can then see the amount of wear we’ve had after X amount of kilometers dependent on which session and then the same for race day. Race day is ensuring that everything is ready, we’ve double-checked the fuel before the car goes out, we’ve got the viscosity and the pace wear rate for the engine oil

WOW: Following a STEM career, we believe it needs to be promoted as an option in schools, particularly in the engineering realm. What would you say to a young woman who wants to get into a role like yours or equivalent, what career advice would you give?

ST: I would just say go for it! If it’s something that you really passionate about, just apply yourself. Do the best you can in school, focus on those subjects that you’re interested in and don’t deter yourself away from them if you know that the end path is a career that’s mainly male dominated. My class cohort had five females, it didn’t deter me, I went all the way through, got really good grades as I just managed to keep focused, I knew the end goal was something I was so passionate about. As long as you’re happy in what you’re doing that’s the main thing.

WOW: And for our final question, do you miss biltong or Ghostpops?

ST: Both! And Cream Soda!