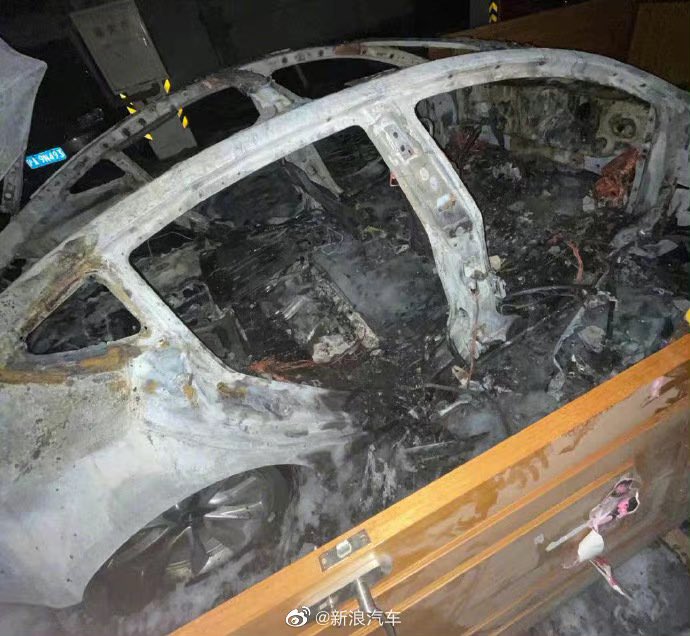 A Tesla Model 3 burst into flames in an underground residential parking garage in Shanghai, China on Tuesday, January 19.

No injuries were reported and the vehicle manufacturer reportedly told local news outlets that the fire was most likely caused by something striking the underside of the vehicle, in a statement, according to CNBC.

“The spontaneous combustion of a Tesla Model 3 in an underground garage in Shanghai last night was probably caused by the battery pack being damaged by an impact to the underside of the car,” said the company’s Chinese office.

Tesla Model 3 caught on 🔥 and exploded in the garage of an apartment in Shanghai, China. seems the first model3 🔥 in China @tesla_master pic.twitter.com/H1gYc3gCtx

Tesla, however, did not clarify whether the vehicle was made locally or imported from the United States, according to CNBC. One of China’s leading battery manufacturers, Contemporary Amperex Technology (CATL), said it did not make the battery pack.

The Model 3 was the nation’s best-selling electric car in 2020, according to the China Passenger Car Association.

However, electric vehicles remain under scrutiny as a number of them have exploded or been plagued by other issues, in the United States and elsewhere, over the years.

In December 2020, erupted “like a flamethrower” in Dallas, Texas, according to a Washington Post report. The Tesla in question was a five-year-old Model S and the incident raised more concerns about the safety and durability of electric vehicles as they get older.

Tesla, however, contended that its vehicles are 10 times less likely to ignite than gasoline vehicles, referencing data from the National Fire Protection Association and U.S. Federal Highway Administration that regard the number of incidents by distance travelled for its fleet of electric cars vs other vehicles.

In April 2019, Elon Musk’s company sent a team to investigate an incident, also in Shanghai, in which one of its parked vehicles apparently exploded.

The company has scaled up its operations in the country and has reportedly started shipping some Chinese-manufactured vehicles to Europe.

On Monday, January 18, it announced that deliveries of the Model Y, which is manufactured in China, have officially begun.