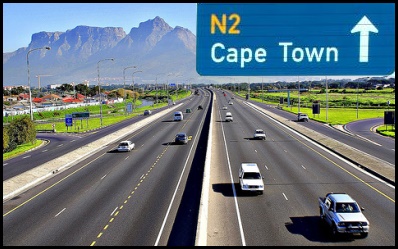 The Safe N2 Project is a community driven initiative formed as a result of the recent unfortunate incidents that have taken place along the N2 in Cape Town.

Various attacks on road users along the N2, as well as a member of the South African Police Services – clearly warrant such an organisation. Since its creation, local residents have shown their support with an overwhelming response.

Tips for driving on the N2 near Cape Town International Airport!

Commuters want to feel safe on the road and don’t want to fear for their lives if they have to pull over on the side of the road. This what the Safe N2 Project aims to achieve.

“The concept was simple: to create a WhatsApp group that members could use to inform each other of dangers, closures, breakdowns as well as requesting convoy travel partners. The overwhelming response and the limitations on the WhatsApp group platform resulted in us getting together to find the best possible solution for the community in order to keep this initiative alive for the benefit and safety of everyone.”

Charmaine Sutherland, one of the executive members the Safe N2 Project adds:

“What is heartwarming for us is the fact that a broken community actually rose from the ashes, joined forces and took hands from nowhere. None of us knew each other. The five committee members only met each other for the first time on Saturday. It’s got nothing to do with politics, race or gender.

“It’s just a community that’s said, ‘We’ve actually had enough, but we want to be proactive. We want to make a difference, we want to help ourselves.”

Residents of Cape Town protest against tolls on the N1 and N2!

The Safe N2 Project has also implemented a sticker system. Allowing users to quickly identify each other and provide aid in the event of a flat tyre or breakdown.

This sticker system will also be used for members who wish to organise convoy trips along the N2 when travelling from Somerset West or other locations – towards Cape Town.

The Whatsapp group has reportedly grown significantly since its creation – consisting of over 4500 members and still growing!

Neil Slater, another of the Safe N2 Project said:

”We got together and said let’s see what technologically resources we have to start building a network of just users, commuters on the N2, and how we can communicate with each other and keeping each other informed on the N2.

Another terrifying reason not to drive on the N2 at night!

“Basically what we do as the N2 Safe Project initiative is establish a platform that people can use to create convoys and to be able to communicate with each other. That is our main focus.”

Emergency numbers to have while driving on the N2!

With the main goal of this group being safety, remember NOT to text while driving!